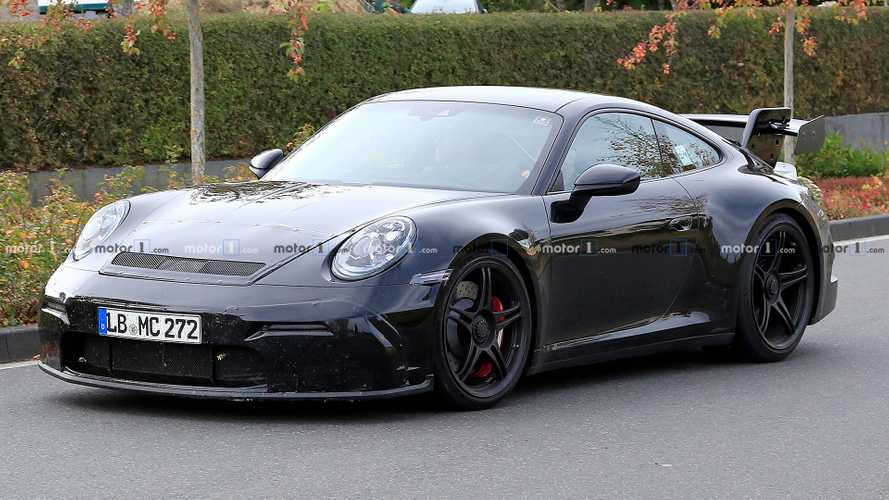 A debut could be over a year away.

Keeping up with Porsche’s development cycle is daunting. New Porsche spy photos of the 911 and 718 feel like a constant stream. It doesn’t help that Porsche offers several 911 models that feel like they are in various stages of a refresh or all-new development. All this leads to the 911 GT3 Touring Package, introduced just a year ago, yet recently spied in prototype form. However, this is likely an early prototype with the official reveal several months away – it’s doubtful it’ll debut before the end of next year.

While we patiently wait for the unveiling, we do have fresh spy photos that show several changes over the outgoing model. There are new air intakes at the front. At the back, we see massive hips and an equally massive rear wing, which appears new. It looks significantly different than the one on the outgoing 991.2 model. It also appears to have meatier end plates. We also see a full-width LED strip at the rear.

Rumors continue to substantiate the idea the 911 GT3 will retain a naturally aspirated powertrain, likely using an updated version of the 4.0-liter engine from the 911.2 GT3. Expect Porsche to offer both a PDK and manual gearbox.

What remains elusive is details about the car’s interior. New 991 prototypes of the 911 Carrera show it receiving a partially digital dashboard – an analog center tachometer flanked by digital screens. With the GT3 coming out well after the new 911 debuts, it, too, should have a similar dashboard layout.

We’re several months away from seeing the new GT3, which means we’ll likely see tons of spy photos and videos of the car before we get any concrete information about performance, price, or powertrain. Being this early in the development cycle means rumors will run wild as we speculate on what Porsche is planning. Hopefully, the reveal comes soon rather than later.