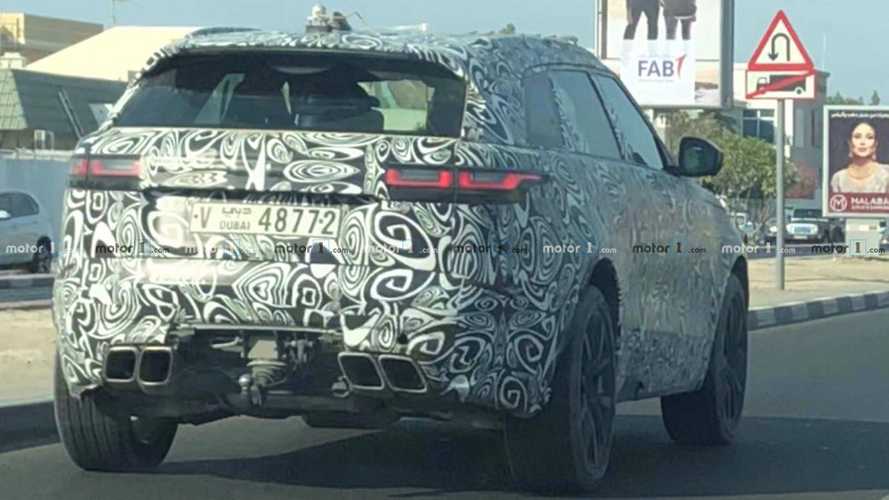 The exhaust pipes are so large, they double as a place for a family of four to sleep during a road trip.

We haven't seen the Land Rover Range Rover Velar SVR testing since April, but thanks to a Motor1.com reader named Faisal, we have now received a fresh glimpse at the performance-tuned SUV. He caught it on the road in Dubai, and the engine "sounded like a proper V8 when it passed my car," Faisal told us.

The gargantuan exhausts are the most notable thing about this test mule. The pipes' outlets look large enough to easily fit your arm into them. The exposed section in the middle doesn't look finished, and we expect a piece of trim would fill this hole on the production version. The rest of the design on this SUV appears identical to the earlier development models.

Spy shots of the Velar SVR's front end reveal that it has a more aggressive front fascia with larger intakes for feeding air to the bigger engine. A lower ride height and sticky rubber do double duty of making the SUV look meaner and add extra performance, too.

The Velar SVR reportedly uses the same supercharged 5.0-liter V8 as the Range Rover Sport SVR where the mill produces 575 horsepower (429 kilowatts) and 516 pound-feet (700 Newton-meters) of torque. This powerplant and an eight-speed automatic driving both axles should be enough for the SUV to hit 60 miles per hour (96 kilometers per hour) in around 4 seconds.

While we don't have any photos of the Velar SVR's interior, it's easy to imagine what Land Rover would do. Expect the model's already award-winning cabin to receive sporty trim like touches of carbon fiber. Thicker seat bolsters would grip occupants when the driver makes the most of the SUV's performance.

We expect the Velar SVR to debut before the end of the year and go on sale in 2019.

Thanks again to Faisal for sharing these shots with us.