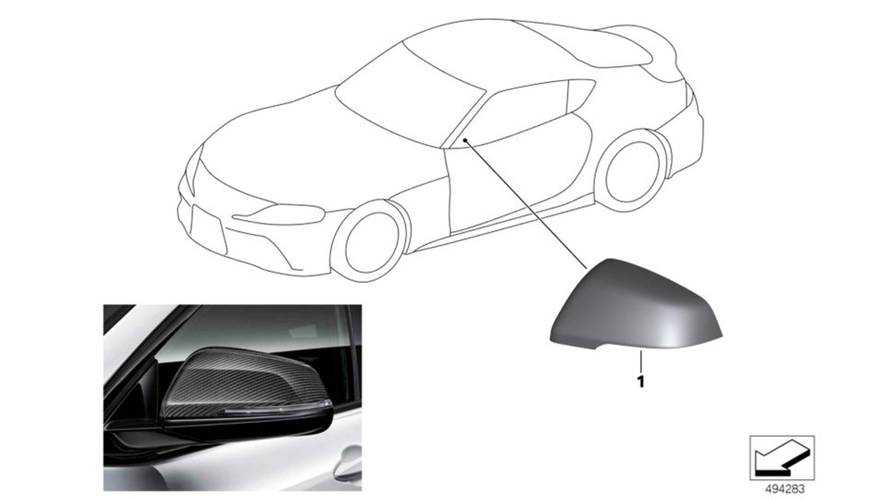 Inside, some of the switches appear to come from BMW.

The Toyota Supra debuts in January at the North American International Auto Show, but a new leak of the vehicle's parts guide provides a wealth of new information about the much-anticipated model. The info here shows how strongly Toyota leverages its relationship with BMW for this project. The details were posted on the website Real OEM, and a staff member on the Supra MKV forums discovered the info.

The guide lists three engines available for the Supra – two of which come to the United States. The base mill in the 20i trim is BMW's B48B20B 2.0-liter turbocharged four-cylinder, and it's exclusive to Europe. The next step up is the 30i trim with the B46B20B 2.0-liter turbo four-cylinder, and the range-topping version in these documents is the B58B30C turbocharged inline six. All of the powerplants hook up to an automatic transmission listed as GA8HP51Z, which suggests an eight-speed setup. At least at this point, the rumored manual gearbox doesn't have a mention here.

The exploded views reveal a Macpherson strut setup for the front suspension and the layout at the back appears to separate the spring from the strut. Adaptive dampers are at all four corners.

The battery sits at the back for better weight distribution.

The exterior is exactly what spy shots and Toyota's teasers tell us about the design, but there are some intriguing quirks on the inside. The gearshift and many of the switches appear to be from BMW, which might turn off folks wanting the spirit of Toyota in their Supra. Drivers look at a digital instrument cluster, and there's a head-up display projected on the windshield.

Buyers have quite a few seating options, too. There are two styles of chairs on display here, and four levels of power controls. The simplest version only allows adjustment of the cushion and backrest. The top one features adjustable thigh support and headrests.

The gallery below contains over 100 detailed images of the Supra. Click through them below for a fantastic look at what's underneath the Supra's skin.