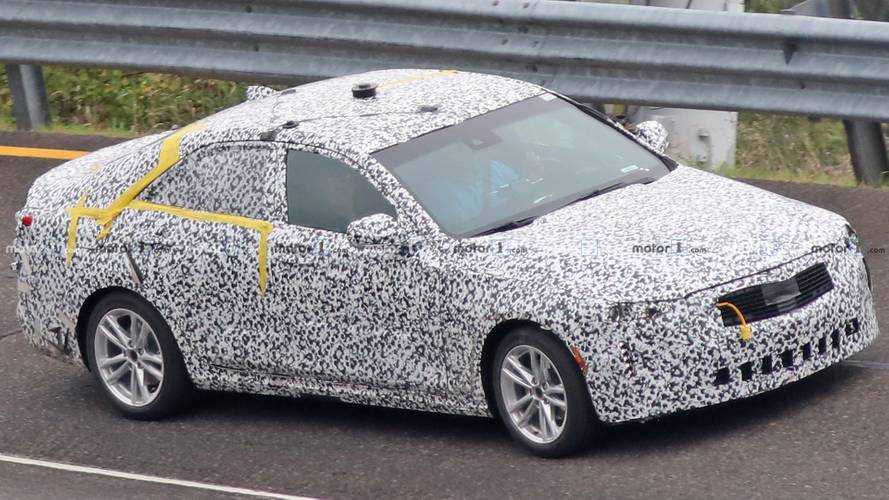 Look for the sedan to arrive around 2020.

New spy shots provide our first look at the upcoming Cadillac CT4 while it laps General Motors' Milford Proving Ground. With the ATS sedan allegedly getting the axe soon, this four-door would take over its role as an entry-level product in Caddy's lineup.

This test mule wears lots of camouflage that keeps us from drawing too many specific conclusions about the CT4's styling (above left). Compared to the upcoming, larger CT5 (above right), this sedan looks less muscular, but they share a similarly chiseled overall aesthetic. The exterior has plenty of sensors, including an array of them on the roof and another on the grille. Looking closely, the front end appears to have Cadillac's cascading headlights, and the taillights have a similar vertical layout.

There are few technical details available about the CT4 at this time. Cadillac promises that all of its models by 2020 would have the brand's Super Cruise semi-autonomous driving system that allows for hands-free motoring. The cutting-edge tech could be a major selling point for the sedan by offering commuters a more comfortable way to get to work.

Get a preview of Cadillac's future:

Cadillac recently showed the CT4, CT5, XT6, and next-gen Escalade to dealers at a meeting in Las Vegas, and the sales folks were reportedly quite happy with what they saw. One attendee said it was the brand's best showing in 25 years.

The CT4 and CT5 will both come from General Motors' Lansing Grand River Assembly Plant in Michigan. The General is investing $175 million into the factory to upgrade the facility to build the new sedans. The CT5 goes into production in 2019, and the CT4 reportedly arrives shortly afterward.