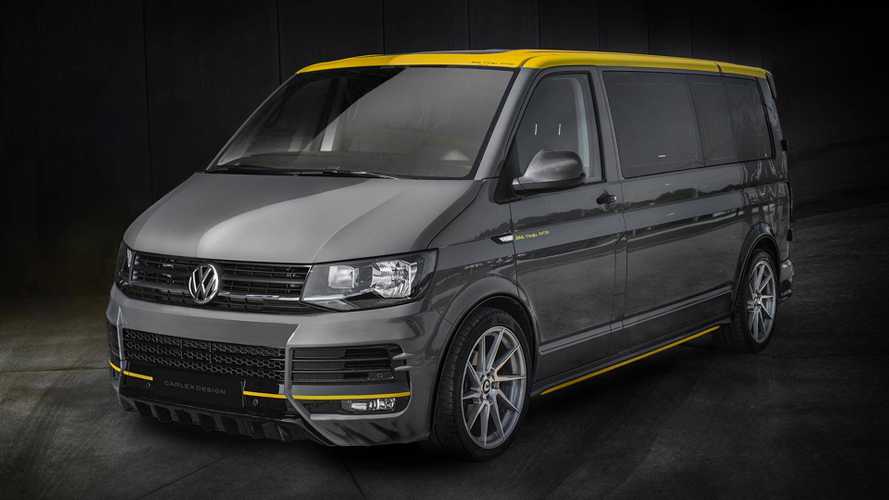 Artist Jeral Tidwell contributes black and yellow skulls that give this van a menacing look.

Even if you have a lot of people to haul, doesn't mean that you can't drive a mean looking vehicle. Carlex Design is making this easier with its new Jeral Tidwell Limited Edition version of the Volkswagen T6.

On the outside, a massive rendering of one of Tidwell's skulls adorns the area from the rear fender to the roof. Carlex also adds a more aggressive body kit. The parts give the van a revised front fascia with larger intakes. There are also extended side sills and carbon fiber mirror caps. At the rear, a roof spoiler and revised bumper are further examples of the meaner appearance. Quad exhausts with dual outlets are now back there, too. To tweak the performance, Carlex installs Eibach lowering springs to drop the ride by  0.79 inches (20 millimeters) and fits a set of Pirelli P Zero tires.

Carlex specializes at interior tuning, and the team there overhauls the Transporter's cabin. Tidwell's art appears on the seats' embroidery seats in yellow and in charcoal gray. The rest of the upholstery is now a mix of Nappa leather and Alcantara. The firm also fits a flat-bottomed steering wheel with a yellow accent strip on the bottom. Jeral Tidwell branding appears on the floor mats, too.

Unfortunately, Tidwell resides in the United States, and the VW Transporter isn't sold there, so he can't own the special edition van that wears his artwork. His personal garage includes an old Mitsubishi Montereo that he's currently restoring.