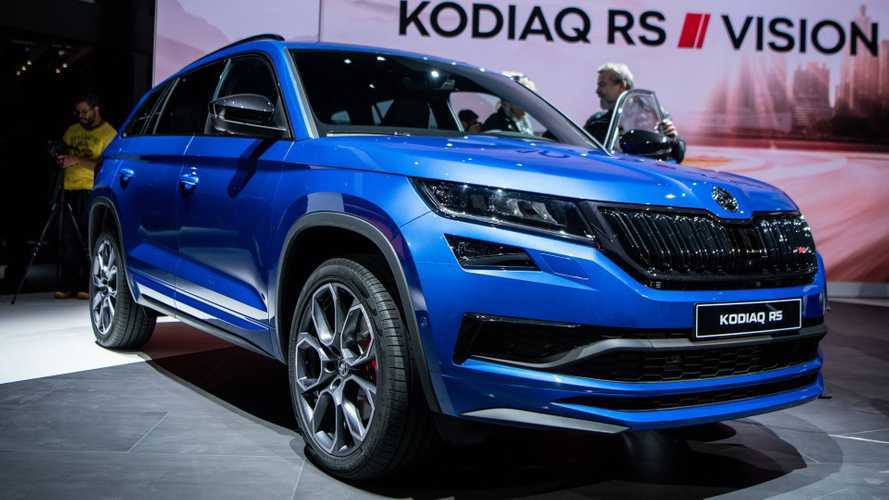 The large SUV features Skoda's most powerful diesel engine ever installed in a production model.

After leaked images and an official preview earlier today, the Skoda Kodiaq RS has finally been revealed in full one day ahead of its debut at the Paris Motor Show. Billed as being the fastest seven-seat SUV around the Nürburgring, the first RS-badged SUV from the Czech automaker is powered by the Volkswagen Group’s twin-turbo 2.0-liter diesel engine also found in the VW Passat and the Tiguan.

As it is the case with the two VW-badged models, the BiTDI four-cylinder mill develops 236 horsepower and a maximum torque of 500 Newton-meters (369 pound-feet) in the fastest Kodiaq. It helps the big SUV reach 62 mph (100 kph) from a standstill in seven seconds before hitting a top speed of 137 mph (220 kph). Skoda’s most powerful diesel engine is connected to a seven-speed, dual-clutch automatic gearbox and an all-wheel-drive system as standard.

Speaking of standard equipment, the Kodiaq RS also benefits from the adaptive Dynamic Chassis Control (DCC) system bundling the Driving Mode Select to automatically adjust the springs and shock absorbers based on the six selectable modes: Eco, Comfort, Normal, Sport, Individual, and Snow. Skoda also installs a progressive steering system without having to pay more, and this will electronically change the steering ratio based on a number of variables, including the vehicle’s speed.

We’ve extensively covered the design with recent articles about the teasers, but we should point out the new red RS logo and the standard 20-inch alloy wheels. Also standard are the full-LED headlights and the Virtual Cockpit, which refers to an all-digital instrument cluster. Available with five or seven seats, the Kodiaq RS comes with Alcantara-wrapped seats with integrated headrests and also has the LED ambient lighting package without having to pay extra.

A first for a Skoda, the Dynamic Sound Boost is standard and uses data gathered from the Kodiaq RS’ electronics to provide a more appealing – albeit artificial – acoustic experience to complement the TDI’s actual sound. It automatically changes its settings based on the selected driving mode, including an Eco mode to keep it as natural as possible.

Skoda will have the Kodiaq RS on display at the 2018 Paris Motor Show starting tomorrow.