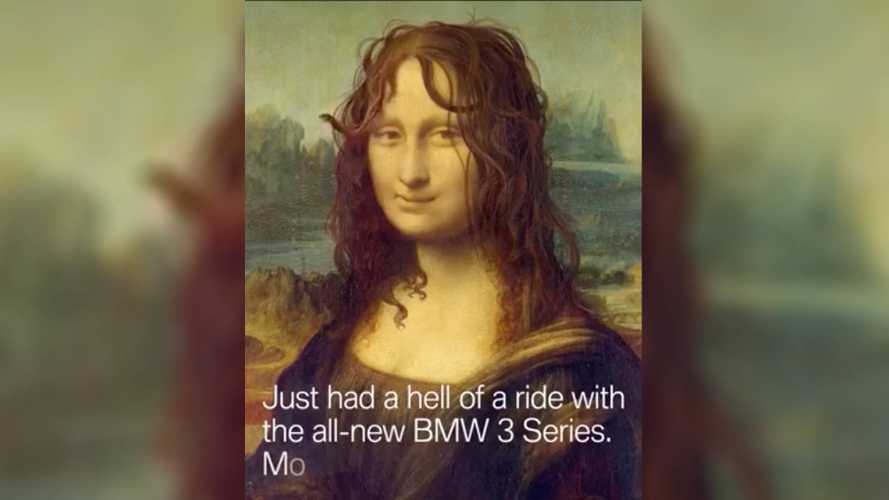 Her frazzled hair tells us all we need to know.

BMW is less than a week away from unveiling the all-new 2019 3 Series. However, that hasn’t stopped the German automaker from releasing a barrage of teasers leading up to the reveal. While many of the teased images show some part of the car, the latest one from the company – posted to the company’s Facebook page – goes in a different direction.

BMW is debuting the new 3 Series at the Paris Motor Show, which is home to the Louvre Museum and one of Leonardo da Vinci’s most famous paintings, the Mona Lisa. So, to drum up excitement for the new sport sedan, BMW released a short clip of the iconic woman with wind-swept hair. Along the bottom, “Just had a hell of a ride with the all-new BMW 3 Series” appears as the Mona Lisa flicks an errant strand of hair with a burst of air from her upturned mouth. It’s really an odd teaser. The screen fades to black before “BMW intelligent personal assistant. Now we’re talking” takes over.

It seems odd to tease the new 3 Series without showing it, but automakers have done stranger things. BMW could be teasing some new personal assistant technology, too, though using the Mona Lisa feels strange. The wind-swept hair is an odd touch, too, and it makes me think more of a convertible than your typical sport sedan.

We won’t have to wait long to figure out what BMW is teasing. Already, we know the new 3 Series will ride on the company’s new CLAR platform. We also know the sedan will have the most powerful four-cylinder engine from the company, meaning it should produce more than 248 horsepower.

The 2019 BMW 3 Series will debut at the Paris Motor Show October 2.