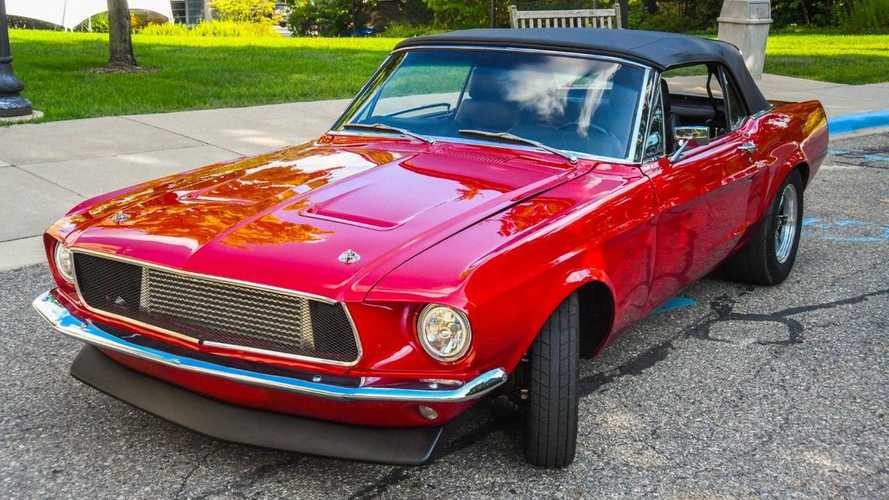 It might be sacrilegious to some, but the build looks absolutely beautiful.

What happens when you merge the body of an iconic American Pony Car with the beating heart of an equally iconic Japanese engine? You become the Drift King of course – that is, as long as you can corral the Frankenstein monster well enough to beat the spoiled son of a Yakuza boss in a mountaintop do-or-die drift battle outside Tokyo. Granted, that car was a 1967 Mustang with the RB26DETT from a Nissan Skyline, whereas this car selling on eBay is a 1968 ‘Stang wielding the 2JZ inline-six from a Toyota Supra, but the concept is still the same.

If you’re completely lost, we’re talking about the infamous final race scene from The Fast and the Furious: Tokyo Drift, where the Mustang/Skyline combination proved victorious. Whereas Fast and Furious is just a movie franchise, this cherry red 1968 Ford Mustang convertible is very much real life. The auction states the car is in the Detroit suburb of Pontiac, Michigan but the owner is in Germany and can’t bring it across the pond. As of this writing there are only 12 hours left in the auction, and the reserve-not-met starting price of $35,000 has zero bidders thus far.

Frankly, that’s a bit surprising to us because this build looks fantastic. For starters, that 2JZ isn’t just a stock mill – the seller claims it makes a whopping 730 horsepower (544 kilowatts) to the rear wheels, and there’s even more power available. It also has a full four-wheel disc brake conversion so the car should actually slow down when you hit the pedal, but if you’re having dreams about endless sideways antics you’ll need to do some retuning since this modded Mustang is set up for drag racing. Otherwise, the car sports a full-on restoration with all kinds of minor tweaks and additions, and as far as we’re concerned it looks gorgeous.

So why aren’t there any bids on this car yet? In this case, sacrilege is probably the word you’re looking for. Typical vintage Mustang buyers want the full-on Mustang experience, and that means a thumping V8 pounding pavement under the hood. Similarly, fans of high-strung Japanese sports cars aren’t terribly interested in wrapping such a capable powerplant in a muscle car body. As impressive and awesome as this build is, the reality is there’s an extremely small audience interested in such an American-Japanese fusion. Apparently, that audience hasn't been reached yet.

Will it receive any bids at all? We’ll update when the auction ends, approximately 12 hours from now.