You can have it with or without AWD.

Honda unveiled the CR-V Hybrid for European markets a little over a year ago at the Frankfurt Motor Show, but that was only a prototype. Fast forward to today, the production-ready version is making its online debut ahead of next week’s Paris Motor Show where the electrified SUV is going to be on display. Not that it comes as a big surprise, but the final version looks virtually the same as the 2017 version.

Honda has also been kind enough to reveal the technical specifications of the Euro-spec CR-V Hybrid, which will be available with either a front-wheel-drive layout or a grippy AWD setup. Power comes from a four-cylinder 2.0-liter i-VTEC gasoline engine working together with an electric motor to deliver a combined output of 181 horsepower (135 kilowatts) and a generous torque of 315 Newton-meters (232 pound-feet).

Get familiar with the regular CR-V 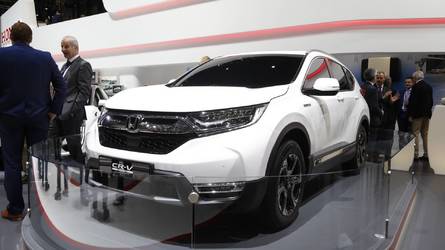 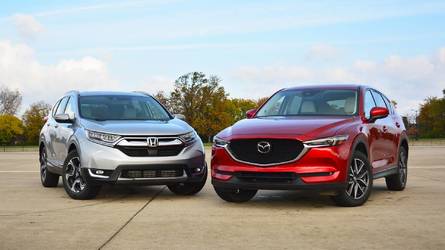 Honda CR-V vs. Mazda CX-5: The Head And The Heart Of SUVs

As you would come to expect, the FWD version is a bit more economical than its all-paw equivalent. In the outgoing New European Driving Cycle (NEDC), the electrified Honda CR-V with a FWD layout has an average fuel consumption of 5.3 liters / 100 km equating to 120 g/km of CO2 emissions. Go for the AWD-equipped version and it will rise to 5.5 liters / 100 km and 126 g/km.

When used in the city, the SUV will automatically switch between Hybrid Drive and EV drive to ensure maximum efficiency. The former refers to when the combustion engine powers a second motor/generator to supplement electrical energy from the battery pack while the latter is when the lithium-ion battery pack feeds the electric propulsion motor to drive the wheels. There’s also an Engine Drive mode during which the gasoline engine powers the wheels.

Honda mentions that at a moderate cruise, the CR-V Hybrid will run in the aforementioned EV Drive mode for more than 50 percent of the time. At higher speeds, EV Drive is activated for roughly one third of the time. It’s all thanks to what the automaker refers to as the i-MMD technology smart enough to decide on its own when it’s time to switch between the available modes.

Honda will begin taking orders in Europe for the CR-V Hybrid next month when it will bring it to the Paris Motor Show starting October 2 to join the updated HR-V and a Civic Type R “ArtCar Manga.”

Ahead of the 2018 Mondial Paris Motor Show, Honda has announced the line up of products that will be exhibited on its show stand. The cars on display will include the all-new CR-V Hybrid, which makes its debut in European production specification, the refreshed and upgraded HR-V SUV, and a specially-commissioned Civic Type R ‘Art Car’.

Ahead of its European show debut, Honda has confirmed official fuel economy and CO2 emissions for the all-new CR-V Hybrid. Under the combined cycle of the revised NEDC test, the front-wheel drive model of the 184 PS (135 kW) petrol-electric SUV has achieved CO2 emissions of 120g/km and official average (combined) fuel economy of 5.3l/100km (53.3mpg). The all-wheel drive CR-V Hybrid variant has CO2emissions of 126g/km and average (combined) fuel economy of 5.5 l/100km (51.4 mpg).

The CR-V Hybrid is driven by Honda’s unique i-MMD technology, which intelligently and automatically switches between three driving modes – EV Drive, Hybrid Drive and Engine Drive – to optimise both performance and efficiency.

At the Paris Motor Show, the production-specification debut of the CR-V Hybrid will be joined by the petrol models of the car, showcasing a range of variants including the new seven-seater option. The latest evolution of Honda’s popular compact SUV has been developed as the most practical, comfortable and refined CR-V yet.

A more advanced and elegant HR-V

The refreshed and upgraded Honda HR-V will make its European debut in Paris. The 2019 HR-V features include enhanced exterior styling, updates to the interior and the addition of numerous advanced technologies.

A more substantial interpretation of Honda’s 'Solid Wing Face’ graphic leads the changes to the design, comprising a new, high-gloss dark chrome panel above the front grille. Projector headlight lenses and LED daytime running lights are also now standard across the range. From launch, the 2019 HR-V will be offered with a 1.5-litre i-VTEC engine, but the range will be extended in Spring next year by the option of a sportier 1.5-litre VTEC TURBO or a 1.6-litre i-DTEC diesel.

In the pursuit of a Civic Type R with a truly bespoke appearance, Honda engaged with Japanese design school, Human Academy Europe based in France, to put a challenge to its students. The competition called for designs that visualised a Manga-inspired ‘Art Car’, with the winning submission to be turned into a full-car wrap.

This remarkable one-off commission will be presented at the Paris Motor Show alongside the Sport Plus model of the Civic hatchback.

To celebrate Honda’s commitment to motorsport, the Scuderia Toro Rosso STR13 Formula One car will be displayed, equipped with the RA618H power unit.

Located in the new exclusive LIMITED area of the Mondial Paris Motor show, another star of the Honda Motorsport program, the NSX GT3 will be displayed. The GT3 racer will be showcased alongside a 2018 NSX road car. The GT3 race version competes in high-level series on three continents for Honda’s Customer Racing Programme, and July 2018 saw the NSX name return to the Spa 24 Hours race, 25 years since the previous generation sports car last competed there.

Highlighting Honda’s expertise across a raft of advanced products, the car line-up in Paris will be bolstered by exhibits from the brand’s motorcycle and power equipment divisions.