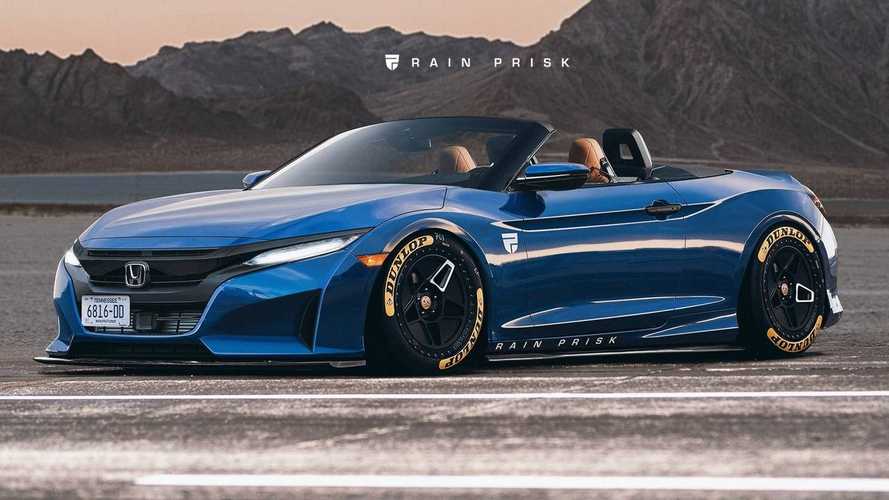 One can only hope...

Before you get your hopes up too high, a reality check is in order – no, Honda is not bringing back the S2000. Toyota is on the verge of resurrecting the Supra and maybe later on the Celica or MR2, but its Japanese rival doesn’t have any plans to dust off an important badge used in the past for a sports car. Nevertheless, the roadster still fuels the imagination of talented fans with Photoshop skills willing to revive the S2000 even if it’s only in the virtual world.

Case in point, Facebook user Rain Prisk, the man behind the superb BMW M Coupe render and the bonkers Range Rover Velar pickup truck, has been kind enough to share with us his vision of a purely hypothetical third-generation S2000. He started off with the latest Civic before turning it into a two-seater roadster with a significantly lower ride height and a far more aggressive exterior design.

The S2000 under the spotlight:

It’s certainly something we would like to see in real life, but the business case for a new S2000 just isn’t there to justify the efforts and costs with development. We got a bit too excited when rumors and photos of a “baby NSX” emerged onto the web, but that ultimately turned out to be the Honda Sports Vision Gran Turismo. An interesting car nonetheless, but at the end of the day, it was merely a concept created exclusively for a video game.

Truth be told, a true S2000 revival would have to be different than this to continue the tradition of a front mid-engine layout, which would require a longer hood to make room for the engine behind the front axle. Still, this Civic-based render shows how the car’s design lines could be adapted for something a bit more exciting.

We posted our own render a while back: