Get Ready: BMW To Unveil All-New 3 Series On October 2 [UPDATE]

Arguably one of the most important debuts at this year's Paris Motor Show.

[UPDATE] BMW just published on Twitter three new teaser images of the revamped 3 Series, which appear to be showing an M Performance model. These have been attached at the beginning of the gallery, below.

An official teaser image of the seventh-generation 3 Series Sedan somehow escaped onto the Internet about a week ago, and now we finally know where it came from. Officially published today, the teaser complements BMW’s press release talking about when and where the sports sedan will receive its highly anticipated world premiere – October 2 at the 2018 Paris Motor Show. 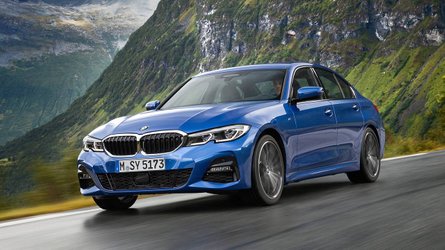 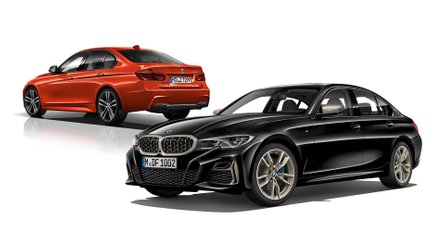 No further details have been provided, but like we said last week, we’re inclined to believe the 3 Series (G20) hiding underneath the semi-transparent car cover is the warm M340i. Based on the latest unofficial intel available, its turbocharged six-cylinder 3.0-liter engine will have roughly 360 to 370 horsepower sent to the rear axle or to an xDrive all-paw setup for which you’ll have to pay extra. An eight-speed automatic transmission will be provided as standard equipment while a limited-slip differential is going to be on the extensive options list.

With a confirmed drag coefficient of just 0.23, the new 3 Series in sedan guise will be one of the most aerodynamic production cars ever made and that will certainly pay dividends in terms of fuel economy. Efficiency will be further improved by a healthy diet of 121 pounds (55 kilograms), although bear in mind that not all versions will be able to shave off this amount of fat.

In recent weeks, BMW has been kind enough to share other details about the future of its best-selling car, mentioning the new 3er will feature wider tracks and an optional M sports suspension reducing the ride height by 10 millimeters (0.4 inches). One of the versions will have the company’s most powerful four-cylinder engine ever made for a production car, and we also know the engineers have gone to great lengths to increase the rigidity of the body structure and suspension attachment.

Also being promised is a new damping system with lift-related dampers celebrating their debut on a BMW to eliminate vibrations generated while traveling over bumps or going hard through the corners. 18-inch alloy wheels are also on the agenda, as is a more precise steering system and an ideal 50:50 weight distribution.

You’ll be happy to hear BMW will livestream on the media site its Paris Motor Show presentation during which we will also get to see the new Z4, M5 Competition, X5, and the 8 Series Coupe. If an embeddable video will be provided between now and October 2, rest assured we are going to share the livestream on Motor1.com. The conference is scheduled to start at 4 PM CET / 10 AM ET / 2 PM GMT.

82 Photos
By: Adrian Padeanu
++
Got a tip for us? Email: tips@motor1.com
Hide press releaseShow press release

The all-new BMW 3 Series Sedan celebrates its world premiere at the Mondial de l’Automobile 2018 in Paris.

BMW presents the new generation of the sports sedan alongside a raft of other new models as the international car show opens its doors on 2 October 2018.

Munich/Paris. The BMW 3 Series Sedan is the Munich-based premium carmaker’s most successful model range worldwide and embodies the core of the BMW brand. The world premiere of the seventh-generation sports sedan is the highlight of the Mondial de l’Automobile 2018 show in Paris. And it will celebrate its global debut alongside an array of other new models at the press conference taking place at 9.00 a.m. CET on Tuesday, 2 October 2018. The venue for the press conference will be BMW’s stand upstairs in Hall 5.

At 4.00 p.m. CET the same day, also at the BMW stand, media representatives will be given exclusive insights into the design highlights, new technological features and innovations in the field of connectivity which shape the character of the new BMW 3 Series Sedan. Chairman of the Board of Management at BMW AG Harald Krüger, Board members Pieter Nota (Sales and Brand BMW), Klaus Fröhlich (Development) and Dr Nicolas Peter (Finance), plus a host of experts from various Development departments will be available for in-depth discussions about the new BMW 3 Series Sedan under the banner “Get Together – Get Your Story”.

If you cannot make it to Paris, you can catch the world premiere on the BMW Group live stream at http://www.live.bmwgroup.com/en/live-streaming/