Porsche 718 Boxster Spyder Not Camera Shy To Drop Its Top 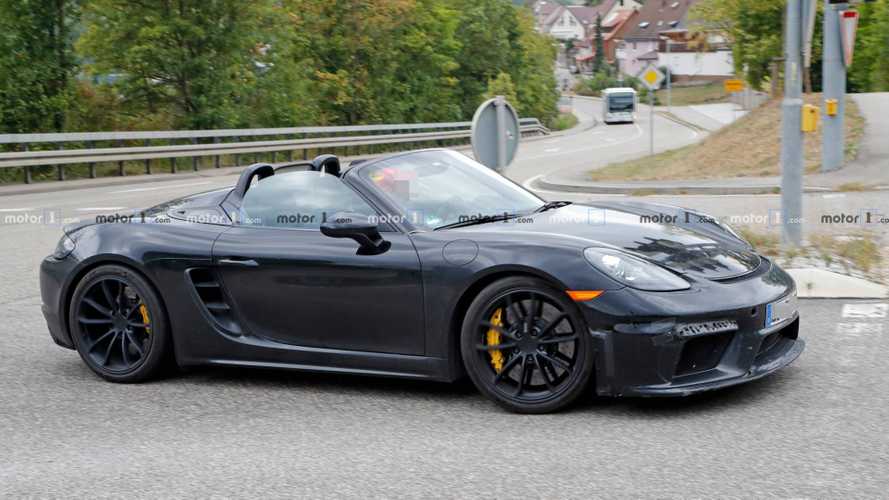 Porsche hasn’t been shy about showing its new 718 Boxster Spyder out in public during the testing phase, but it has been roughly a couple months since we saw the stylized droptop out and about. Compared with previous photos we see the same black tape covering LED lights and other minor tweaks to the front fascia. We also see the Porsche crest in full view on the hood – something the automaker often covers up despite the company’s name being in full view on the back.

Speaking of the rear, there’s still some curious tape down low around the exhaust outlets though not quite as much as we’ve seen previously. The red top is gone this time as well, though amusingly the driver is wearing a bright red hat. Is that some kind of code or just a funny coincidence? Yeah, you’re right – funny coincidence.

These shots do give us a neat look at the Spyder’s flying buttresses, no doubt the stand-out feature for this range-topping 718 Boxster. In previous spy shots, we’ve observed this car riding a bit lower than the typical 718 GTS, and that seems to be the case here as well. That could indicate additional tuning to the suspension will come to the production version. One thing we’re fairly certain of is the powerplant, which should be a version of the 4.0-liter six from the 911 GT3. We’re expecting that mill to produce somewhere in the neighborhood of 400 horsepower (298 kilowatts) – down from the 911 but still a hefty kick up the ladder from the 365 hp (272 kW) in the GTS.

Our insiders have yet to hear a specific release date for the Spyder, but we know it has to be very soon considering the minimal coverings and the lengthy testing phase for the car. Stay tuned for an official reveal in the coming weeks as we move into the auto show season.