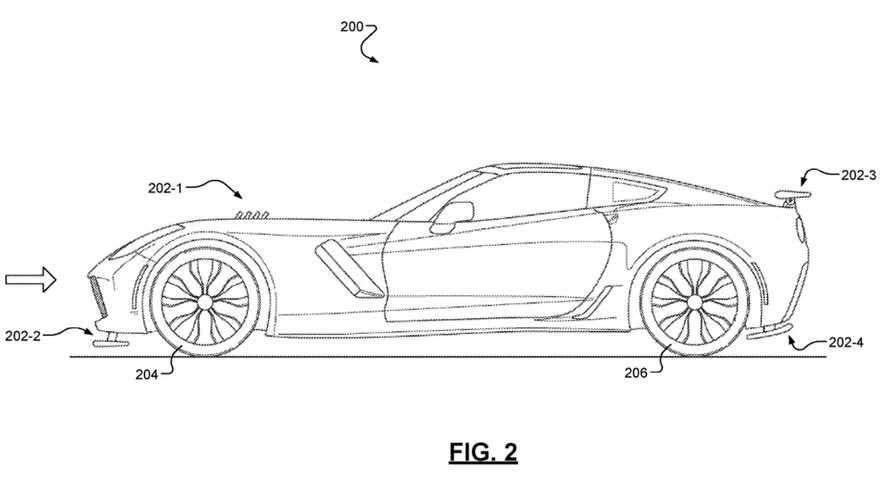 The patents describe different methods of using various sensors to create the data for optimizing the use of active aerodynamic parts.

A pair of patent filings from General Motors reveals that the company is developing new active aerodynamics tech, and one of the included images (above) suggests that the systems could show up on the Corvette. Jalopnik initially discovered the filings.

The first patent with a publication date of September 4 covers a "vehicle, system, and method for controlling active aerodynamic elements." The layout uses a holistic strategy by monitoring steering, acceleration, and braking inputs, in addition to wheel speed sensors and the current driving mode. Wings, shutters, and vents would adapt accordingly.

The later patent from September 11 describes an "aerodynamic actuator control systems and methods," and it offers a little more detail about what GM is thinking, including showing the Corvette sketch. The tech actively monitors the longitudinal and latitudinal forces on the tires, and uses this information to adjust the various actuators that control the aerodynamic elements. Sensors on the front wheels would offer the data for adjusting elements at the nose, and there would be a similar relationship for ones at the rear. By comparing the difference in readings from each side of the vehicle, there could be tweaks to affect the respective corner of the machine.

GM filed for both of these patents in 2016, but the patent office didn't publish them until now. Given the rate of auto development, the tech could be on the road soon, if the automaker actually intends to use it.

While we'd love to see a bevy of active aerodynamic aids on the upcoming mid-engined Corvette, there's no indication that the sports car could have it yet. None of the many spy shots and videos of the machine so far show visibly moving wings or vents. However, Chevy's engineers could hide them behind the camouflage or incorporate the elements underneath the car, so we can't completely rule out the possibility.