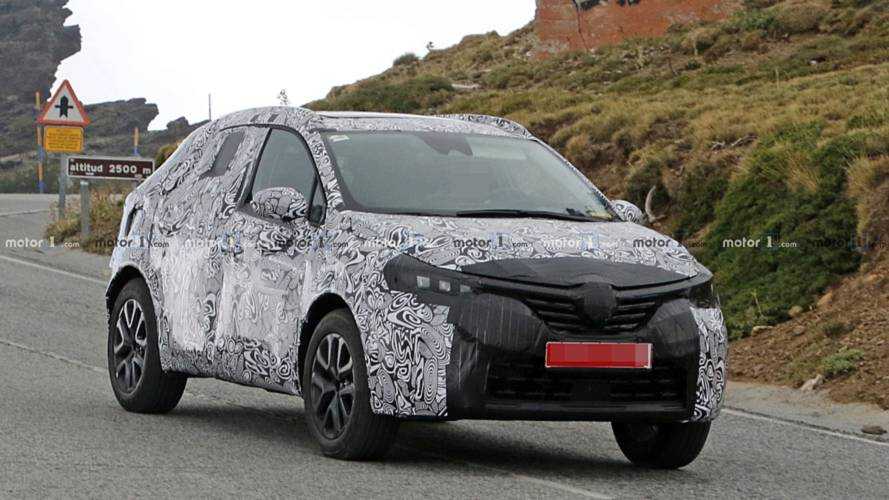 Think of it as a Clio with a bit more ground clearance.

Today brings us our first look at what could be a new Clio-based sport-utility vehicle from Renault. Technically speaking, there’s already such a creature in existence called the Captur, but our sources tell us this isn’t merely a facelifted version of that crossover. This new model would slot beneath the Captur and go after subcompact crossovers in the European market like the Ford Fiesta Active.

A new Clio hatchback is coming too:

We don’t know too much about the new endeavor, other than it appears to be a typical Clio with a bit more ground clearance. The two test cars spied today are still well wrapped in camouflage but we can see enough to easily identify the trademark Renault face. Less obvious is what’s happening on the rear doors – the current Captur maintains a straight beltline whereas the Clio kinks upwards. There are thick coverings over the primary test car we captured on camera, but looking closely at the second car in the side-by-side photos we can almost see an upward turn on that rear window trim. That could be the nail in the coffin that these are Clio crossovers.

In any case, there’s no hiding the roof rails, nor will this new model keep the Clio’s hidden rear exterior door handles. There could be a bit more height to the rear for some extra cargo space, but that could also simply be a trick of the swirl camo wrap. We can easily see the taller ride height, and the front fascia looks to have some added bulk compared to the standard Clio as well.

Underneath, we expect this crossover to carry over the Clio’s current powertrain. That means it should be front-wheel drive only, with either a three-cylinder gas engine or four-cylinder diesel connected to a choice of automatic or manual gearboxes.

The rumor mill has been silent on when this new baby crossover could be revealed. With this being our first sighting we’re tempted to say it will show up sometime next year, but with the world’s insatiable appetite for all things SUV, Renault could surprise us in a couple weeks at the 2018 Paris Motor Show.