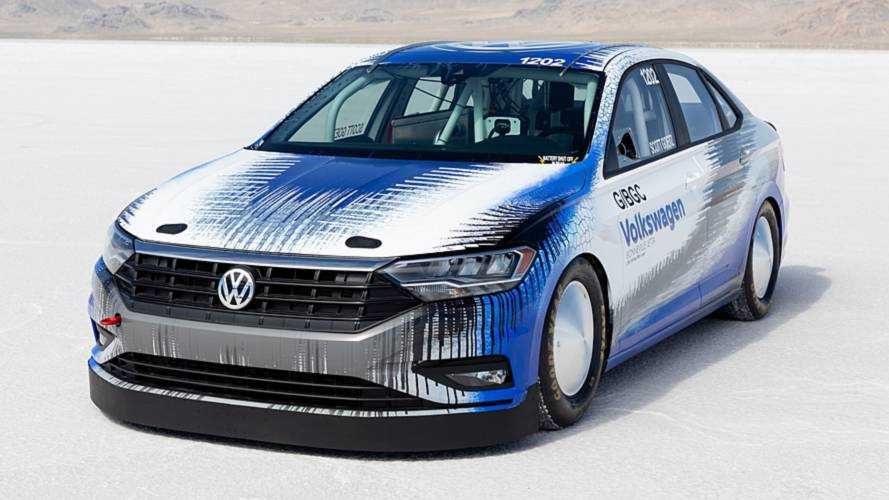 The 600-horsepower Jetta is now the fastest car in the Blown Gas Coupe class.

When Volkswagen introduced the purpose-built Jetta for the Bonneville Salt Flats some months ago, the plan was to have it ready by August for the Bonneville Speed Week. However, the team involved in the record-breaking attempt encountered a problem as the speedy Jetta suffered a “silly transmission issue” while on the dyno, prompting VW to push back the run by a month. They could’ve worked an 18-hour day to have it ready on time, but ultimately decided to wait until September.

Everything went according to plan the second time as the specially modified Jetta managed to reach a top speed of 210.16 mph (338.15 kph) near Wendover in Nevada at the famous Bonneville Salt Flats. It happened during the Utah Salt Flats Racing Association’s (USFRA) World of Speed event and the custom Jetta took down the Southern California Timing Association’s (SCTA) Blown Gas Coupe (G/BGC) class record of 208.472 mph (335.50 kph). Behind the wheel of the car was Scott Goetz, a veteran Salt Flats racer.

Discover the road to a new record

Based on the 2019 VW Jetta, the car was customized by THR Manufacturing to prove the great potential of the automaker’s EA888 engine. The standard configuration of the engine will find its way underneath the hood of the upcoming Jetta GLI where it will likely produce more than 200 horsepower. In the Bonneville Jetta, the modified turbocharged four-cylinder engine generated a whopping 600 hp at 8,500 rpm when tested on the dyno.

The engineers were able to extract three times more power by installing a new turbocharger, exhaust, camshafts, valves, and connecting rods, while keeping the stock crankshaft and the basic block.

Engine aside, the Bonneville Jetta also had to go through other changes in the attempt to set a new land speed record in its class. Bespoke wheels and tires were installed, along with a lowered suspension, and a limited-slip differential to boost traction. The numerous niceties you’ll find in the standard 2019 Jetta were removed to save weight, while a roll cage and a racing seat with harness had to be added for safety purpose. For the same reason, the cabin was fitted with a fire suppression system and two parachutes were attached to the trunk lid to help the vehicle slow down after its high-speed run.