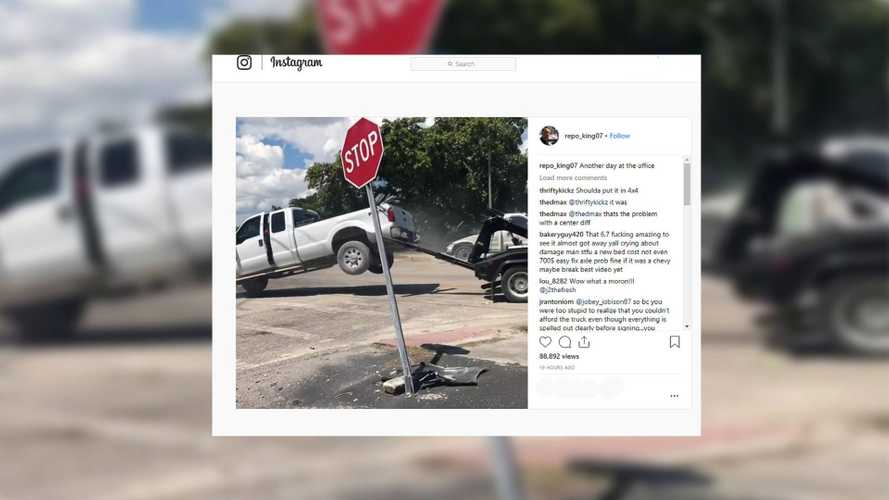 Both the pickup and the driver are now behind bars.

We’ve seen a few videos of people flipping out when the repo man shows up, but this one certainly ranks near the top of our batshit crazy list. We’ll be up front in saying we don’t have all the details but here’s what we do know: This Ford F-Series diesel was picked up for a tow and the truck’s owner wasn’t having it. The harrowing video shows the driver frantically trying to get the pickup free, doing an untold amount of damage in the process. Amazingly, the driver does manage to get the truck back on the ground, at which point the clip abruptly ends.

The tow truck is from Specialized Towing based out of Miami, so we assume this incident took place somewhere in the area. We also assume this was a repossession for non-payment, since this Instagram clip comes from a user named repo_king07. Honestly, there could be more information in the comments of this post, but with nearly 850 posted in the last 20 hours, we can’t possibly review them all.

See Karma In Action As Illegally Parked Ferrari Gets Towed
⠀

From what we did see, there were plenty of people offering support to the tow truck driver with the expected scattering of e-thugs talking about how they’d “mess up” the repo dude, because threatening people on social media behind the anonymity of a keyboard is so impressive. There were a few posts from different users that suggested they were the owner former owner of this Ford, but take that with a grain of salt because, according to a second Instagram post from repo_king07, the delinquent driver is right where he should be for such asshattery – behind bars.

We won’t pull any punches here – tow truck drivers don’t have the best reputation and in some cases it's well-deserved. Just visit the Reddit thread that tipped us off on this viral video for all kinds of sketchy tow stories not involving legitimate vehicle repossessions. Like any profession, there are good apples and there are bad apples but in this instance, it seems to be a cut-and-dry operation. The guy didn’t pay his bill – which for a truck like that F-Series Power Stroke diesel was likely a sizeable monthly payment – and the repo man was tasked with picking up the property. Now, this guy not having a truck is the least of his worries.