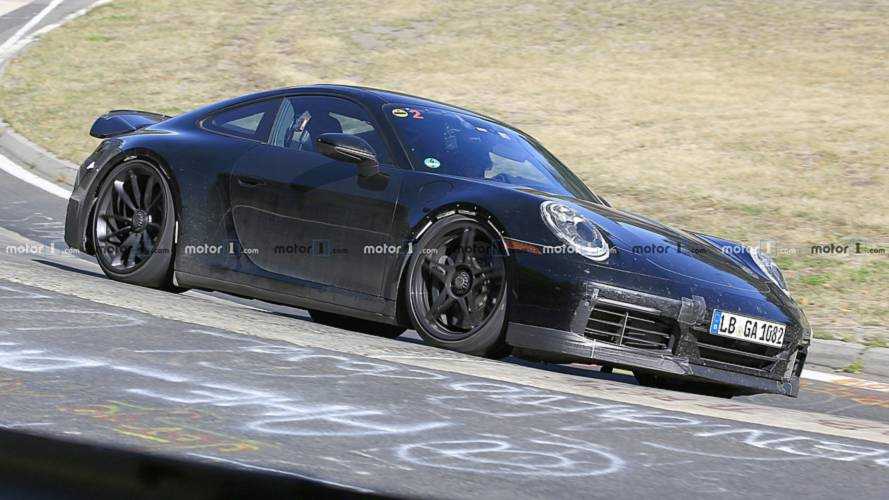 Stuttgart's next track-focused Nine Eleven looks as if it's glued to the road.

The cat is pretty much out of the bag when it comes to the design of the regular Porsche 911 (992) versions, but we’ll have to wait more to see the GT3 without the disguise. The next iteration was spotted this week hard at work around the Nürburgring where the test driver was pushing the prototype to its limits, according to our spies.

It looks a bit odd not just because of the weirdly camouflaged rear bumper, but also due to the reason there’s something going on with the wheel arches. It could be a sign Porsche has plans to make the front and rear tracks a bit wider, although it’s too early to know for sure at this point. An obvious omission is the big rear wing, while the third brake light looks like an afterthought.

These are all signs the prototype seen here is far from being the finished product, and even the exhaust looks like a temporary setup. At the front, the bumper looks as if it was taken from a lesser 911 version since it’s not all that aggressive. We do get to check out the full-width LED taillight strip we’ll be seeing more of with the 992-gen model, and also how the work-in-progress vehicle rides extremely low while tackling the Green Hell’s numerous corners.

If we were to rely on the rumor mill, the biggest change the 911 GT3 will be going through has to do with the engine. Even though Porsche promised just a few months ago to keep the naturally aspirated mill alive for as long as possible, it looks like it won’t be able to resist the temptation of adding a turbo. Should the reports pan out, the next-gen model will be turbocharged to roughly 513 hp and 524 lb-ft (710 Nm).

Don’t expect the 911 GT3 to come out anytime soon as first Porsche will introduce the more attainable derivatives of the 992. These are expected to be unveiled before the end of the year.