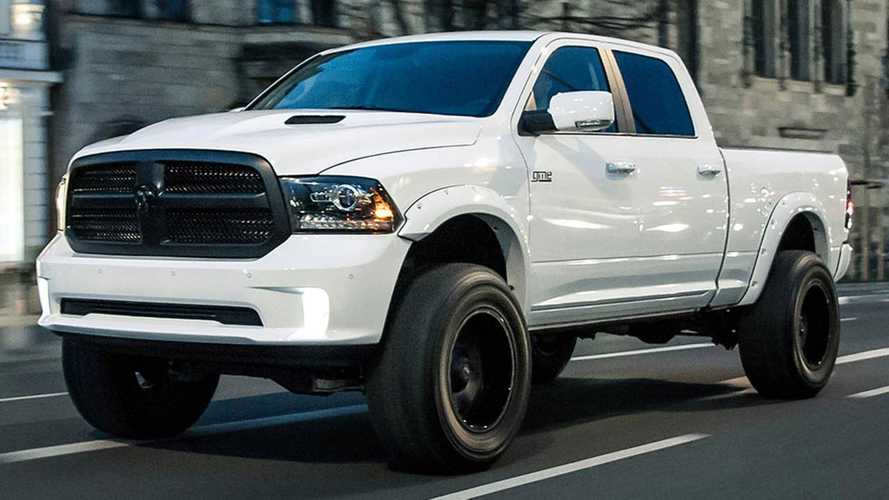 Pickups are an uncommon sight on German roads – at least compared to the United States. Even the ones that are on the street in Deutschland tend to be of the smaller variety, so driving Ram 1500 over there is sure to grab attention. The additional tuning from German Motors & Engineering (or simply GME) on this one to create the Bigfoot Edition gives the truck an even meaner look would probably garner as many eyeballs as rolling down the street in a Ferrari.

GME starts with a previous-gen Ram 1500 in the mid-range Sport trim and with the four-door Crew Cab body with a six-foot, four-inch (1.93-meter) bed. For a big boost in muscle, the tuner gets approval from the German Technical Control Board (TÜV) to attach Edelbrock's supercharger kit for the pickup's 5.7-liter V8. The blower pushes the output to 550 horsepower (410 kilowatts) and 530 pound-feet (718 Newton-meters), instead of the stock figures of 395 hp (291 kW) and 410 lb-ft (556 Nm). The setup also includes an air-water-air intercooler. GME claims that if buyers are willing to improve the engine's internals, then additional tuning with the supercharger can take the numbers as high as 900 hp (671 kW).

Pick up the latest details about the Ram 1500

To accentuate the forced-induction engine's sound, GME installs its own exhaust system. Remote-controlled valves inside the pair of 2.99-inch (76-millimeter) diameter pipes let owners tune the noise to their preference.

Just improving the engine output and its sound isn't enough for GME, and the company's next focus is on the Ram's stance. Compared to the stock truck, the Bigfoot earns its name from a 9.5-inch (24-cm) suspension lift. The components to make this growth spurt possible include height-adjustable, remote-reservoir dampers from Fox, revised subframes, upgraded steering knuckles, and replacements for other suspension components. Underneath the rig, it rides on 20-inch wheels with 37-inch Toyo off-road tires. Wider fender flares cover the broader rubber.

GME also makes some useful tweaks to the Ram's exterior. Automatic running boards extend for an easier job getting into the higher cab. A soft tonneau cover is over the bed for extra protection for what's inside. The firm also fits Xenon headlights to replace the original halogen illumination. Matte black trim covers the grille surround, and dark chrome mesh is in the center.

No, a Dodge RAM does not really look very discreet when it comes off the line. Especially if it’s the more than six-meter-long “Crew Cab Long Bed” model with a large cabin combined with a long truck bed. However, U.S. car specialist company German Motors & Engineering (GME), based in Schkeuditz just outside the Leipzig city limits, shows how it can be done up much more spectacularly with its Dodge RAM 1500 “Bigfoot Edition”. To accomplish this feat, GME sharpened up the project vehicle, based on the Dodge RAM 1500 Sport Crew Cab, in the three most decisive disciplines of classical tuning handicraft: look, sound and performance.

Since the latter is also the core competence of the GME technicians, it was naturally the focus of the project. In cooperation with the well-known U.S. specialists from Edelbrock, the GME engineers adapted their compressor kit to European requirements so that it could receive exhaust emission certificates and the approval of the German Technical Control Board (TÜV).

The Roots screw compressor replacing the factory-provided intake manifold in the Edelbrock kit coaxes a whopping 550 HP and a maximum torque of 718 Nm from the 5.7- liter HEMI V8 when combined with an air-water-air intercooler with a separate cooling circuit and an electric refrigerant pump. And that is not all: the compressor has power reserves of up to 900 HP up its sleeve, so this partner to the standard engine remains discreetly in the background. After an appropriate boost to the engine hardware, therefore, this can substantially enhance the performance even more.
The GME valve exhaust system made from high quality stainless steel with a TÜV parts certificate has a wide variety of sound registers and volumes at its command. The exhaust system is “made in Germany” and has two parallel 76mm diameter exhaust gas systems running from the cat, each of which takes the hot air from four cylinders along separate paths to the two tailpipes. In principle, this amounts to two exhaust systems in one vehicle, whose waste gas streams do not mix: two ducts, two exhaust valves, two mufflers, two tailpipes. In this way, GME achieves a clean V8 sound without the “indefinite” noise typical of the RAM’s series model, which brings the exhaust pipes together underneath the vehicle and then splits them later on. Thanks to the exhaust valves, which can be switched to various driving modes by way of a remote control, the GME RAM manages to be both soft as a whisper for long-distance drives with the family as well as producing the hearty, purist V8 rumble. The operating state of the system as well as the exhaust gas back pressure are shown on the display of the entertainment system.

Even at first glance, the impressive height of the pickup strikes the eye: a full 24 centimeters of suspension lift are generated by the GME “Bigfoot” off-road conversion, so that the pickup now towers up to a full 2.15 meters. The keystone of this upward growth is the GME suspension lift system with height-adjustable FOX suspension struts with external oil pans. In order to keep the fifteen centimeters of suspension lift generated by the new struts from impairing the chassis geometry and kinematics, adapted subframes, steering knuckles and suspension parts were also installed. The spacers of a “Bodylift” kit add four additional centimeters of space between the ladder frame and the pickup’s chassis.
Its wheels do credit to the name of “Bigfoot”: GME has mounted 37x13.50R20 Toyo offroad, deep-tread tires on in-house, matte black 12x20” forged wheels. Compared to the
standard dimensions, this wheel-tire combination has a diameter that is ten centimeters larger, which accounts for the five centimeters of the cumulative 24 centimeters of added height so far “unaccounted for”. The transmission control module and the speedometer were adjusted to the larger rolling circumference of the XXL wheels in the interest of proper functioning. The hefty track width of 2.23 meters gives the lifted compressor RAM a wide stand, which minimizes its tendency to tip when taking curves or on rough terrain.

Extensions that can be retrofitted

Wheel arch extensions with a bolted look, which have also been TÜV-certified, ensure that the wheels are covered as required and make the Bigfoot RAM look even more wide- shouldered. Since the “visible” bolts are dummies and not really screwed into the fenders, which are actually attached by means of the original screwing points inside the wheel arch liners, the extensions can be retrofitted at any time.
In order to make it easier to “clamber up” into the considerably raised pickup, GME has installed running boards that can be automatically extended and come out to about the same height as the factory-installed boarding aids after being electrically positioned.
One oft-mentioned drawback of pickups for everyday use is their open bed. This apparent deficiency can be eliminated, however, with a protective bed cover, like the one borne by the GME Ram. The foldup cover makes it possible to transport all sorts of things on the long bed regardless of the weather and can be locked for maximum convenience with the factory-installed central locking system.
Furthermore, GME’s American boy has been given additional upgrades, such as converting the headlights to bright xenon technology. The black-and-white concept of the pickup is rounded off by a matte black coated grille with dark chrome X grille mesh inserts and emblems with a dark chrome look. What’s more, the standard antenna lodged on the passenger side fender has been tidily cleaned and replaced by an invisible windshield antenna for a neater look.