The winners will be named during the Detroit Auto Show in January 2019.

The organizers of the 2019 North American Car, Utility and Truck of the Year competition have revealed the semifinalists for this year. Interestingly, in the car category, there are 14 semifinalists instead of the usual 12, because there was a tie in voting for 12th. As the official rules say, when this happens, both vehicles are included in the list. Only one American car has managed to impress the jury, the Buick Regal Tour X, with all other models coming from Japanese, German, South Korean, and Swedish manufacturers. 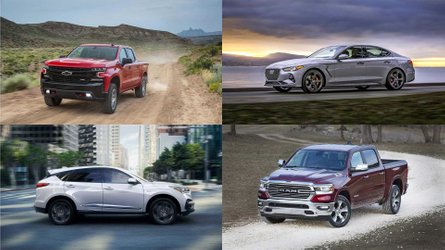 2019 North American Car of the Year semifinalists in alphabetical order:

Only three candidates were eligible for the truck category, which means all they qualify for the next round of the competition. These are the Chevrolet Silverado 1500, GMC Sierra 1500, and Ram 1500.

The next step for the jurors is a comparison drive event scheduled for 16-18 October in Ypsilanti, Michigan, where they will have the chance to test and compare the semifinalists directly. The finalists of each category will be announced during the Los Angeles Auto Show on November 28. The winners will be named early next year, at Automobili-D/North American International Auto Show on January 14, 2019.

The winners for 2018 were the Honda Accord, Lincoln Navigator, and Volvo XC60.

The NACTOY jury has voted and the board is please to present the official list of semifinalists for the 2019 North American Car, Utility, and Truck of the Year Awards.

Please note — this year there are 14 semifinalists (rather than the usual 12) in the car category because there was a tie in voting for 12th. As in previous years where we have encountered this scenario, we are including both vehicles. With only three candidates on the eligibility list for the 2019 North American Truck of The Year, no juror voting was needed, and all three truck models advance to become semifinalists.

Next, jurors will gather in Ypsilanti, Michigan from October 16 -18 for a comparison drive event to test drive the semifinalist vehicles. After a second round of voting is completed, finalists in each category will be announced at AutoMobility LA/LA Auto Show, November 28 at 8:00 AM to 8:15 AM in Structure A. The 2019 North American Car, Utility and Truck of the Year winners will be announced at Automobili-D/North American International Auto Show, Monday, January 14, 2019.