The two Dodges share the same engine, so which one is quicker?

Dodge is a major player in the muscle car scene with its myriad variants of the Challenger coupe and Charger sedan. You don't need to drop around $65,000 to get Hellcat, either, if you're in the market for a competent drag racer that still functions happily as a daily driver. As proof, this clip shows what happens when a Dodge Challenger R/T Scat Pack and Charger SRT 392 line up at the strip.

The R/T Scat Pack is the cheapest model in the Challenger lineup that gets buyers the 485-horsepower (361-kilowatt) 6.4-liter V8. Prices start at $39,995 for a version with a six-speed manual and an eight-speed automatic takes the figure to $40,590. It also includes four-piston Brembo brakes, Dodge Performance Pages for the infotainment system, and performance seats in houndstooth cloth. 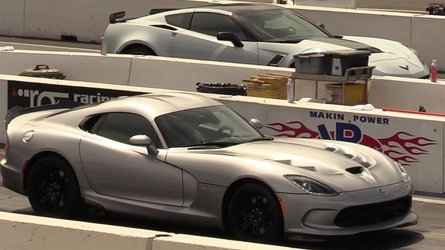 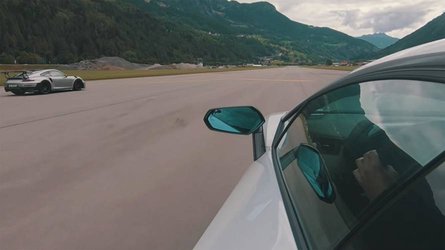 The Challenger in this video doesn't have it, but buyers can now get the optional 1320 on the R/T Scat Pack that makes the coupe an even better drag racer. The extra equipment includes an SRT-tuned Adaptive Damping Suspension with Drag Mode, Line Lock, TransBrake, Torque Reserve, and 41-spline half shafts. The 20-inch wheels feature Nexen SUR4G street-legal drag radial tires. To cut weight, customers can get the vehicle without a front passenger seat and rear bench or add them as a $1 option. Dodge claims the R/T Scat Pack 1320 only needs 11.7 seconds to cover the quarter mile.

The Charger SRT 392 is a bit more expensive at $51,145. Like the Challenger R/T Scat Pack, it uses the 485-hp 6.4-liter naturally aspirated V8, but this version of the sedan comes exclusively with an eight-speed automatic. In addition, the performance-oriented four-door has six-piston Brembo calipers in the front and four-piston stoppers in the back; three-mode Bilstein adaptive dampers; and SRT drive modes that include launch control, shift light control, and valet mode. Inside, there are leather-upholstered, heated performance seats and an 8.4-inch infotainment system with navigation.

Now that we know all the details, watch the actual race. The Challenger gets off the line first, but the Charger quickly makes up the difference