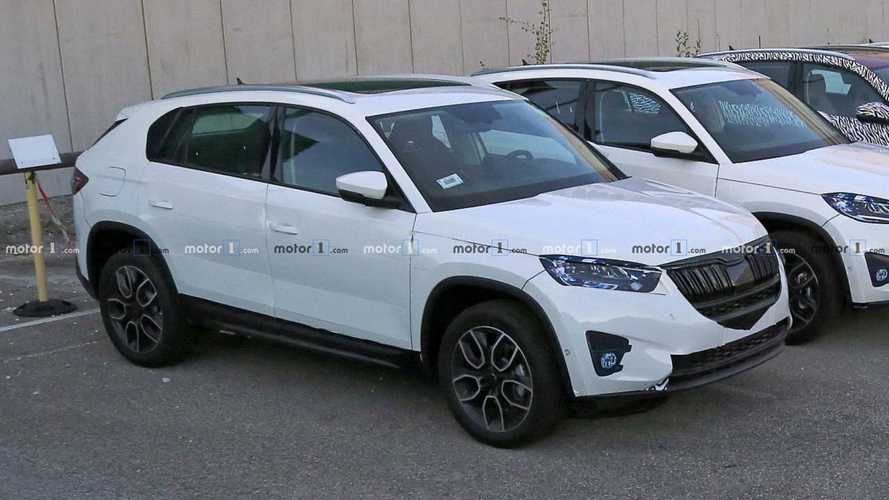 An official debut is believed to be scheduled for this month's Chengdu Auto Show.

Skoda’s plans to give its largest SUV model to date, the Kodiaq, a coupe-inspired version are a secret to no one, but these new spy photos finally confirm the Czech manufacturer is already working on that car. And, judging by the minimal amount of camouflage, the automaker is probably in the final stages of development.

Interestingly, Skoda is trying to disguise the Kodiaq coupe, expected to be called the Kodiaq GT, as a Mazda CX-5. The foil on the front bumper shapes a CX-5-inspired grille, while at the back the taillights are reminiscent of the clusters seen on the Japanese SUV. However, the camouflage can’t fool the trained eye, as it’s easily distinguishable by the grille pattern and the overall size that this is indeed the Kodiaq coupe.

Speaking of dimensions, the sloped roofline at the back changes the way the SUV looks, but in fact, it retains its basic exterior dimensions almost unchanged compared to the regular Kodiaq. Still, the more stylish rear end will have a negative effect on the boot space, but customers in that segment are probably well aware of that fact.

Word on the street is the Kodiaq GT will debut during this month’s 2018 Chengdu Auto Show with sales in China scheduled to kick off before the year’s end. Unofficial information suggests it will be offered with a 2.0-liter TSI turbo gas engine (186 hp and 220 hp) with either a standard front-wheel drive or an optional AWD system. Regardless of the choice, all models will be fitted with a DSG seven-speed dual-clutch gearbox.

At this point, it hasn’t been confirmed whether Skoda has plans to sell the coupe-SUV mashup in Europe, but rumors about such a possibility have been swirling around for months. Another market that expects the Kodiaq GT is India, where the only available engine will be a 150-hp 2.0-liter four-banger.