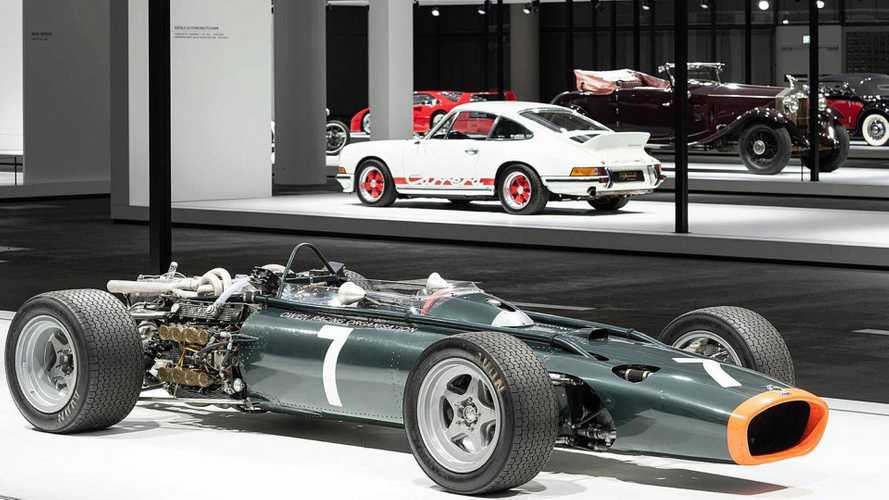 From a Pagani to a beat-up Fiat Panda, the collection spans the entire breadth of cool automobiles.

Sorry, you missed the 2018 Grand Basel classic car show in Switzerland that just ended. However, we have over 100 photos of the amazing vehicles from the event that provide the next best thing to actually being there. This is an absolutely amazing collection of machines.

The Grand Basel show's organisers bill the event as "the ultimate global show for automotive masterpieces," and it's something quite different in the classic car scene. The vehicles have a museum-like display where they sit on brightly lit, stark white risers in an otherwise dark, space. The planners individually picked the 113 machines to display so that they ran the gamut from classic Italian exotics to giving the next-gen Tesla Roadster its European premiere. The resto-mod Lancia Delta Futurista also debuted there, and it brought the rally-bred hatchback up to modern standards with additions like carbon fiber body panels and reinforced transmission.

While You're Here, Check Out These Classic Machines, Too

In a unique touch for shows like this, roughly a quarter of the vehicles on display were available for sale. So if a wealthy attendee falls in love with a car, they can potentially add it to the fleet in their own garage.

Start clicking through the gallery below to check out this amazing exhibition of vehicles. Highlights include machines like artist Pablo Picasso's Lincoln Continental. The Fiat 500 Spiaggina that reinterprets the old Fiat-500-based Jolly for a modern era is also there. Plus, the show includes a gorgeous Citroën-DS-based coupe.

If your interests lean more towards modern supercars, there are plenty of those, too, including models from Bugatti, Pagani, and Ferrari. On the other end of the automotive spectrum, the chairman of Grand Basel's advisory board decided to display a beat-up Fiat Panda 45. Another curator decided to display a collection of 1:87-scale models.

Grand Basel, the ultimate global show for automotive masterpieces, has closed the doors to its first fair in Basel and is celebrating the resounding success of its debut on the world stage. More than 12,000 people including international connoisseurs, experts and collectors, as well as culture enthusiasts with a broad spectrum of passions.

As an inaugural show that was designed to demonstrate the spectacular presentation of the Grand Basel show concept, approximately one fourth of the cars on display were officially available to buy.

The show's exhibits were carefully selected to just 113 cars, spread over a total show space of 32,000 square metres. Exceptional cars travelled to the show from Germany, Switzerland, Austria, Belgium, the UK, Italy.

As well as showcasing exclusive and rare cars of the highest calibre, Grand Basel presented cultural highlights and several world premieres. The fascinating 'Linea Diamante' car by Gio Ponti was revealed by Prof. Paolo Tumminelli,leader of 'The Automobile by Ponti' project to make the 1:1- scale model a reality, 65 years after it was designed.

Other global show debuts at Grand Basel included the Delta Integrale Futurista by Automobili Amos, a restored and reimagined version of the iconic Italian hot hatch using contemporary materials and technologies; and the 2020 Tesla Roadster, which was never presented in Europe before.

Appearing for the first time at any public show anywhere in the world, the ex-Pablo Picasso Lincoln Continental was presented by Swiss artist and Grand Basel advisory board member, Sylvie Fleury. Chairman of the advisory board, Prof. Paolo Tumminelli, showed his own interpretation of automotive culture - a derelict, but entirely driveable and useable -Fiat Panda 45.

Fiat 500 Spiaggina by Garage Italia was presented by renowned creative entrepreneur Lapo Elkann – a new car built to the same principles of the original Fiat ‘Jolly’ but brought right up-to-date. Advisory board member and legendary designer,Giorgetto Giugiaro, was honoured at the show with a group of cars to celebrate his 80th birthday year. Within his curated frame was the GFG Sibylla GG 80, bringing together beautiful design with a zero-emissions powertrain.

Grand Basel not only brought together some of the world’s most exceptional cars but presented them in a surrounding reminiscent of modern museums, honouring them as the masterpieces that they are.

Speaking after the inaugural show, Global Director Mark Backé said: “We promised that Grand Basel was not just another car show, and the guests to our first fair in Basel understand that this promise was kept. As this was the first impression for Grand Basel, certain sections were less commercial in nature and designed more as an exhibition, so that the concept could be introduced in the appropriate manner. We truly celebrated excellence in motion and were joined by a broad audience of collectors and enthusiasts interested in automobile aesthetics, technological sophistication, art and culture.”

Initial media reception to the first show has been outstanding, with the presentation hailed as “a feast of automotive beauty”, “the car as rolling sculpture”, and one publication proclaiming: “the organisers of Grand Basel have truly reinvented the motor show”.

Guests of Grand Basel provided their personal impressions from the debut show, a selection of which are included below:

Flavio Manzoni, Senior Vice President of Design at Ferrari S.p.A.:
“It’s so important to show the shape of a car as it was intended, as a masterpiece or a work of art. These presentation frames are great at stimulating contemplation – normally, we’re used to seeing cars in noisy and chaotic environments. But here, there’s nothing but the car, its name, and its date. There are no distractions.”

Duccio Lopresto, representative of the Lopresto Collection:
“Firstly, the design concept is unique and secondly, the selection of cars is amazing. It looks like we’re in an indoor Concours d’Elegance, which is very unusual and new for the scene. The focus is very much on art and design, which are my two favourite things in the car world, and I like that it’s a fresh and younger concept.”

Carlo Borromeo, Chief Designer at Automobili Amos:
“The car industry is at an important turning point right now with big changes coming on a technological and cultural level. As a result, people are finally coming to terms with the fact that cars are not just instruments, but they can be artistic and emotional objects. I have spent half of my life learning from people older than me and now I’m learning from people who are younger. This new generation really cares about these cars on a cultural level and this is the first show I’ve seen where this attitude is not only accepted, but also celebrated.”

Marc Kienle, Head of Kienle Automobiltechnik GmbH:
“We feel well presented here at Grand Basel. This environment is a perfect match for our automobiles. We met many interesting guests which are exactly our target group and talks with the potential buyers have already progressed. Participation in one of the next Grand Basel shows is of great interest to us.”

Frank Wirzberger, Brand Manager for Bugatti Frankfurt and Munich Dörr Automobiles GmbH:
“This year we wanted to see what the first show would be like, but for the next show we will certainly look to host something at Grand Basel for our own customers, to share this incredible new experience of automotive presentation with them. A challenge of our daily business is to reach new customers, and this turned out to be very easy and successful at Grand Basel.”

The format of Grand Basel was conceived so that presentation of the show in various locations around the world is part of the agenda. The automobile influences – and is influenced by – society and culture in every part of the globe, and so the discussions at Grand Basel will always have relevance.

About Grand Basel
Grand Basel is the ultimate show for automotive masterpieces. Showcasing a top-of-the-range selection of cars from the past, present and future, Grand Basel is the first and only show to present the automobile in the cultural context of art, design, architecture and lifestyle.

Grand Basel addresses a discerning audience of collectors, restoration and conservation experts, dealers, manufacturers and connoisseurs, offering a global platform for exchange. The show is being organised by the MCH Group, a leading international live-marketing company headquartered in Basel, which is also responsible for Art Basel. Following its premiere in Basel in September 2018, further shows in other parts of the world are being planned.