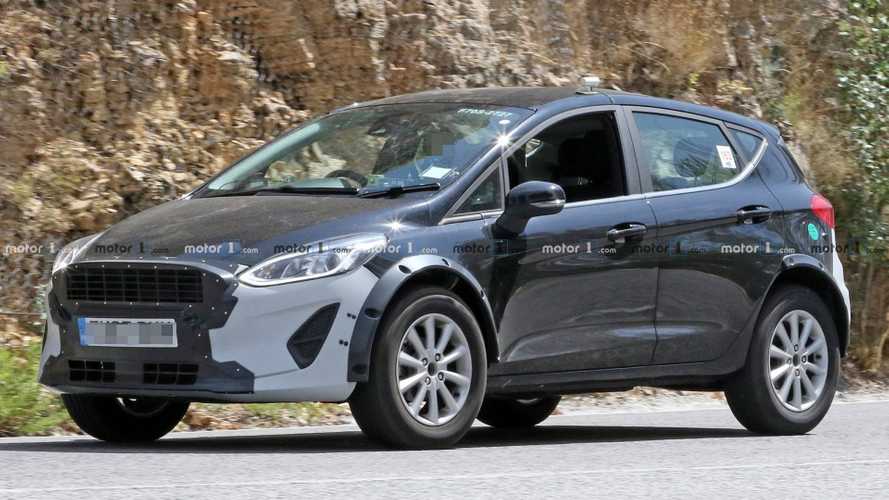 The Focus-based small SUV could be hiding underneath this Fiesta mule.

The next couple of years will be pretty intense for Ford. The Blue oval marque is set to launch a number of brand new vehicles, including a hybrid Mustang and a Mustang-inspired SUV, and will also say goodbye to some established nameplates. One of the new additions to the lineup will be a small B-segment SUV/crossover, work on which has already started. This new set of spy photos takes us closer to the development process of the so-called Baby Bronco.

Actually, this is not the first time we are seeing a Fiesta-based prototype out testing. Back in March this year, we saw another mule performing cold winter tests. It had a longer wheelbase compared to this trial car and also wheels with five nuts. The new prototype also appears to be a tad wider, but that could be just a side effect of the plastic wheel arches.

This jacked up Fiesta mule is an RHD prototype, which suggests the future B-segment SUV will be offered virtually everywhere around the world. This new vehicle is believed to be based on the platform that underpins the fourth-generation Focus. The architecture is highly flexible and to Ford is basically what the MQB is to Volkswagen.

The automaker promises the small SUV will feature “off-road positioning and imagery,” and will be inspired by the design of the classic Bronco from the mid-1960s. It won’t ride on a body-on-frame chassis, but will instead share many of its suspension and powertrain components with the next-generation Escape/Kuga duo.

“Designed to win a growing number of people who love getting away and spending time outdoors with their families and friends,” the Baby Bronco will most likely benefit from an all-wheel-drive system and is expected to get an engine range consisting of four-cylinder turbocharged units.

Different sources suggest the vehicle will debut in early 2020, at about the same time the Mustang crossover and the revived Bronco SUV will arrive.