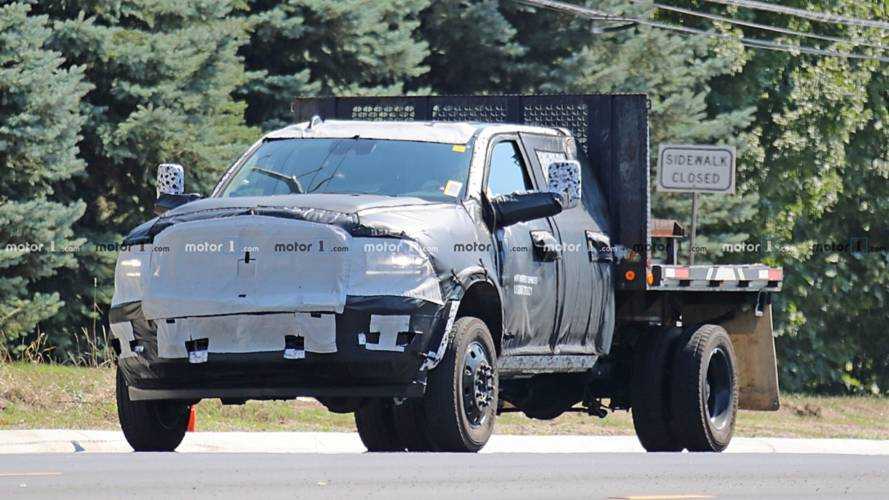 The all-new heavy hauler will share the handsome lines of its smaller Ram sibling.

The pickup truck segment has been awash with the handsome new Ram, but the beefy work-spec HD model is still several years old. That will change for the 2020 model year, and this new batch of spy photos gives us a better idea of what to expect from the heavy-duty workhorse. It should come as no real surprise that, from what we can see thus far, the Ram HD will borrow heavily from its smaller sibling both inside and out.

This particular unit is obviously getting some endurance testing out of the way with a simulated load on a flatbed in place of a box. Camouflage covers are still heavy on the truck, but the wind and lighting seem to be just right for us to see through the white tarp up front. The headlights and grille look very much like the new Ram 1500, though we suspect the size of the grille is a bit larger to echo both the bulk of the truck, and to convey a bit more machismo for its hard-working nature.

Inside, things don’t appear to be quite as gruff. This pre-production truck has most of its coverings out of the way, and we can easily see the Ram 1500’s elegant new accommodations forming the backbone in the greenhouse. The dash layout is the same, with big climate control vents flanking the touchscreen in the center stack. We see more manual control knobs under the screen, but otherwise it looks to be standard-issue Ram, right down to the spoked steering wheel. The only significant difference is the steering-mounted shifter for the automatic transmission.

The other significant difference with the Ram HD will obviously be in the powertrain department. Hemi engines should remain an option, but the HD will also soldier on with its 6.7-liter inline-six diesel. Look for more power than what’s currently available, which currently maxes out at 385 horsepower (287 kilowatts) and a planet-busting 930 pound-feet (1261 Newton-meters) of torque.