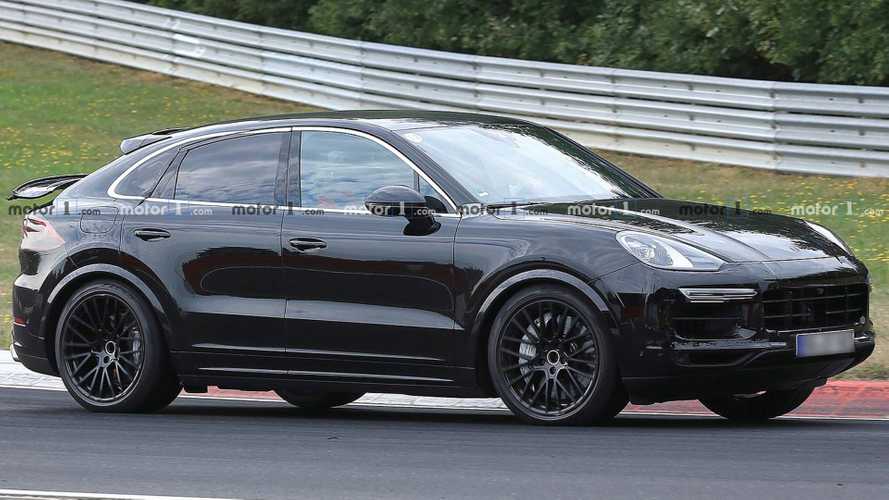 Porsche resculpts the Cayenne's roof to give the SUV a sleeker silhouette.

New spy shots are providing a much better look at Porsche's upcoming sleeker take on the Cayenne that we are calling the Cayenne Coupe until the German brand gives it an official moniker. The pictures provide the first chance to see the vehicle's oddly placed active rear wing that emerges from roughly the center of the hatchback, rather than the top of the roof where wings generally are.

Like most Porsche test mules, the company dresses this one in black and uses matching tape for concealment. The front end of the Cayenne Coupe looks a lot like the standard model, including the three-opening grille and LED headlights. The major design changes start behind the B-pillar where the roof arches downward, rather than remaining flat. The tweak gives the Coupe a sleeker appearance at the expense of cargo space. The company conceals the taillights on this test mule, but expect them to stretch across the entire rear like on the standard Cayenne.

A previous spy photo (above left) suggests that the cabin carries over from the existing Cayenne (above right). Test mules so far only have two headrests in the back, which points to a four-seat layout. However, it's possible a five-passenger might be available, too.

There are no powertrain details for the Cayenne Coupe yet, but the similarities with the existing Cayenne suggest that the engine range might carry over from the current SUV. Look for Porsche to do a slow rollout of the powerplants to maintain hype for the new model.

Look for Porsche to debut the Cayenne Coupe next year and for it to be on sale for the 2020 model year.

Or Rent An Existing Porsche