Ultra rare, bespoke hypercars are not new. There’s always a handful of manufacturers toiling away on five or 10 examples of some super exotic that sell for millions of dollars. However, while some hope to achieve hypercar greatness, few make it past development and a handful of prototypes. It’s the nature of the business. Apollo, an automaker born from the ashes of Gumpert, is forging ahead with the IE – Intense Emotion. There’s been a lot of pomp and circumstance about the hypercar since it’s announcement last year, with examples popping up in various places. A new video shows a striking purple example rocketing down an airstrip – and it sounds glorious.

The Apollo IE is a spaceship for the road 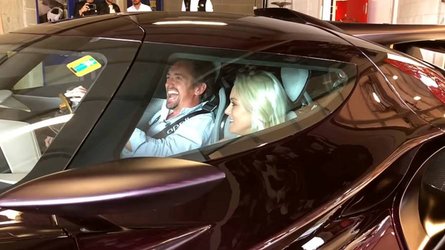 James May And Richard Hammond Check Out The Apollo IE
⠀ 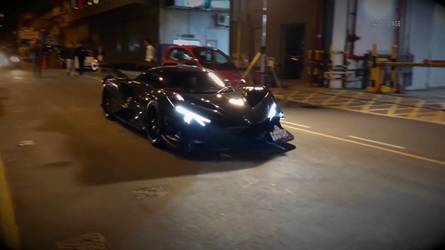 The Apollo IE Looks Like An Alien Spaceship Driving At Night

The video shows the Apollo IE taking several runs down the strip and back, with its 6.3-liter V12 engine roaring and its exhaust popping like an angry hornets’ nest. The engine produces 780 horsepower (581 kilowatts) and 560 pound-feet (758 Newton-meters) of torque. It’s enough to rocket the alien spaceship from zero to 62 miles per hour (0-100 kilometers per hour) in just 2.7 seconds. Top speed is 207 mph (333 kph) While it certainly has the power to destroy any competitor, it appears the IE captured here is doing modest runs up and down the airstrip.

When Apollo first announced the IE, there was a healthy bit of skepticism – as there often is with such hypercar ventures. However, back in June, Apollo partnered with HWA AG in hopes of putting the final production touches on the IE. HWA AG sounds familiar because it’s the same company behind the Mercedes CLK GTR race car – and its road-going coupe and roadster versions. It’s also the same company spun off from AMG.

With HWA AG and Apollo working together, development should conclude before the end of the year. Apollo is scheduling customer deliveries for sometime in 2019. The company will build just 10 examples each worth $2.6 million.