New Porsche 911 Carrera Spied Winging Its Way Around The 'Ring 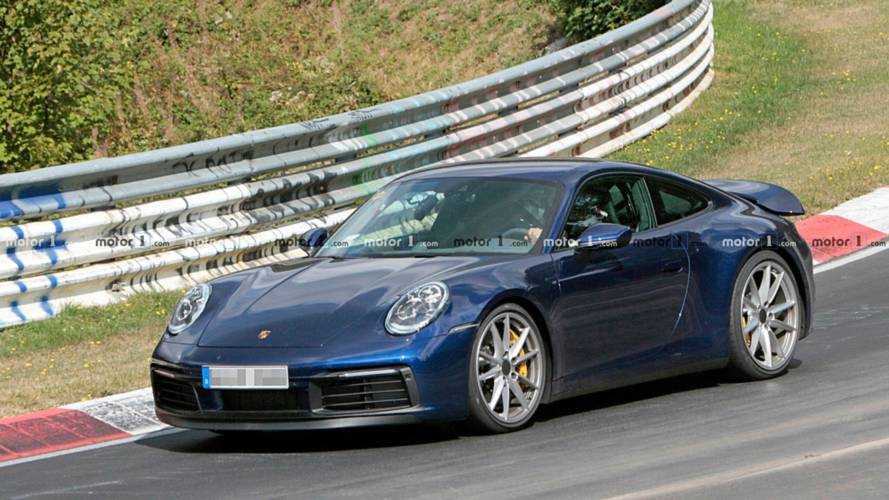 A few bits of tape at the back are all that remains on the pre-production 992-series supercar.

There’s really no mystery as to what the new 992-series Porsche 911 will look like. We’ve seen it in the open air for a couple months now, save for a few curious pieces of tape in areas that, for whatever reason, Porsche feels should be kept secret. This latest batch of 911 shots at the Nürburgring are pretty much the same, with some covering on the full-width taillights being the only point of mystery.

That’s not to say there’s nothing to learn from these photos. For the first time we’re seeing the new active rear spoiler in action – at least on a camo-free car – deployed as the 911 carves corners at the Green Hell. This actually appears to be the same stunning blue Carrera we saw a month ago, however, a second glance reveals dual exhaust outlets at the back instead of quads. This is likely a base Carrera getting some on-track exercise, but we've also seen higher-trim 911s out and about, including the next 911 Turbo.

Of greater mystery is the new 911’s source of power. We know there will be flat-six engines with turbos, including the GT3 which is rumored to leave the naturally aspirated realm behind for the next-generation. The scope of the power from these engines isn’t known, but increases across the range are pretty much a certainty. Also in the mix will be a hybrid model, which is thought to utilize the base 3.0-liter mill with a single electric motor to generate a combined 480 horsepower (358 kilowatts).

We’ve seen much less of the interior, though what we have seen tells us that’s where the new 911 will differ significantly from the current model. An analog rev counter will take center stage with digital gauges on either side, matched with a new center display and plenty of buttons.

We’re expecting Porsche to make the new 911 official next month, coinciding with the Paris Motor Show.