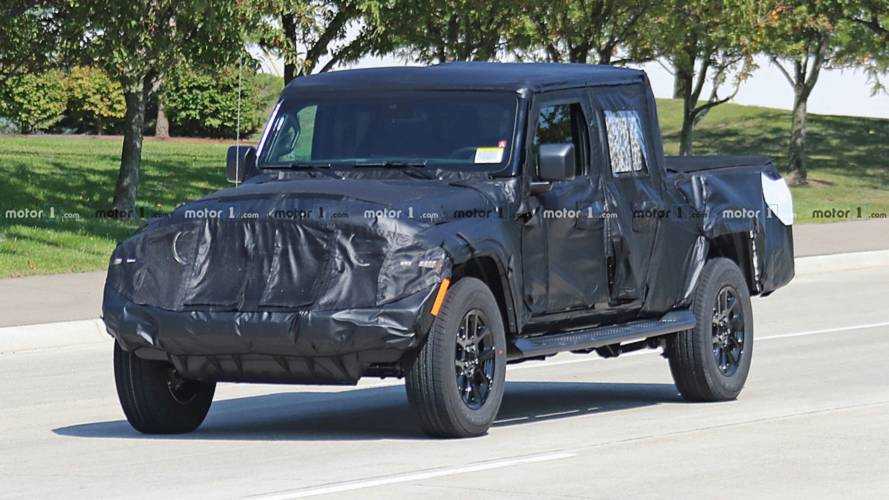 Over 50 spy shots show us the new interior, wheels, undercarriage, and more.

Our spy photographers have been on a mission to get a good look at the forthcoming Jeep Scrambler pickup, and they’ve been chasing prototypes all over Michigan. At this point the trucks are still wearing heavy camouflage but that hasn’t stopped the pictures from rolling in, and we have over 50 shots in this gallery showing the Wrangler pickup from pretty much every angle. And though the camo is still thick, we are able to glean some fresh details.

For starters, these trucks appear to be final versions so even though they’re still fully covered, a reveal shouldn’t be too far away. Previous prototypes were caught with older JK-series components inside, but now we can see the current JL-Series designs in the greenhouse thanks to a couple close-ups of the interior. Furthermore, a good look at the wheels shows tire sizes identical to the current Jeep.

The photos also appear to show two different Scrambler models. We think one might be a Rubicon with the aggressive Falken off-road tires, while the other could be a Sport model. In both cases, the Scrambler should ride on a modified version of the Wrangler Unlimited’s frame with styling similar to the current Wrangler. We say similar because it’s quite likely there will be some additional tweaks up front to help further differentiate the truck from the standard-issue off-roader.

The Scrambler should slot into the mid-size pickup range to do battle with the Chevrolet Colorado and Ford Ranger, and it could eventually spawn a hybrid version as well. When it launches, we’re expecting to see FCA’s familiar 3.6-liter V6 under the square Wrangler hood, paired with an eight-speed automatic.

Expect to see the heavy wrap coming off soon. Production is said to begin next April, and since these appear to be production-spec models, a reveal later this year isn’t out of the question. If we don’t see it at the Los Angeles Auto Show in November, it will almost certainly go live at the North American International Auto Show in Detroit next January. In the meantime, enjoy the big gallery of spy photos below.