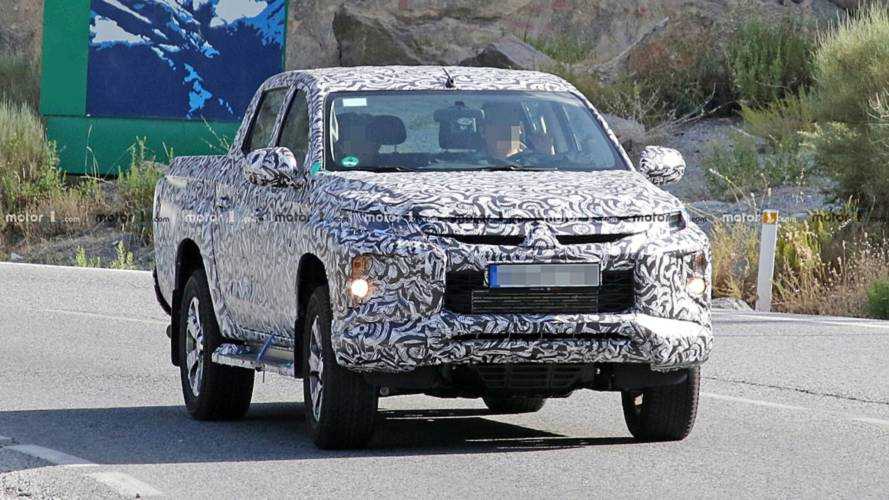 The Triton is wearing all-new eyes, among other changes.

Mitsubishi hasn’t sold a pickup truck in the United States for over 20 years, but other markets around the globe are well acquainted with the company’s venerable L200, AKA Triton depending on where you’re from. The current fifth-generation model hit the scene in 2015 and is due for a mid-cycle refresh, and spy photographers caught a couple prototypes out and about, much to the dismay of driver and passenger in the lead vehicle.

The compact trucks are caught without any heavy camouflage, but both are still fully wrapped to throw off changes to the body lines. Still, the wrap cannot conceal the significant updates that will come to the front clip. The pickup will get an all-new face that splits the headlights and running lights, creating thin light strips at the top with larger units further down. To make that work the truck will have a new grille that’s narrower to match the lights, with the lower air intake moved up to create a second grille between the new light cluster.

In profile the changes are far less dramatic, though it appears a new hood will accompany the significant changes up front. The Mitsubishi’s high beltline with up-kink glass on the rear doors is familiar, but there could be new taillights under the camo wrap. The rear bumper appears smaller as well, and is more integrated into the bed. We have no idea why the wheels also have a camo wrap – the six-spoke design doesn’t appear revolutionary by any means, but perhaps there’s a special color or design beneath the cover.

We don’t have any solid info on changes to the powertrain or interior, but some updates to both are expected. At the very least we’d expect to see a slight bump in power, not to mention a few more tech updates inside.

Look for the refreshed L200 to debut early next year.