Kia ProCeed Spotted On The Autobahn With Thin Camo Wrap

And a bonus cameo of the supposed Ceed GT.

The ProCeed is about to be revealed sometime this month, with its latest teaser consisting only of its great-looking rear end. Kia seems to be preparing for its grand reveal by testing the sporty shooting brake on the road, which is pretty much expected. What wasn’t expected, though, was seeing the ProCeed in thin camouflage wraps, as captured in this 30-second video that was recorded from Germany’s Autobahn.

Better yet, the ProCeed was seen with its hatchback brother. It isn’t clear if it’s the upcoming Ceed GT, as Kia’s kind of mum on details about the pumped-up version of the hatchback, but what we know is that it would have around 200 horsepower on tap – about the same oomph as the previous-generation model. 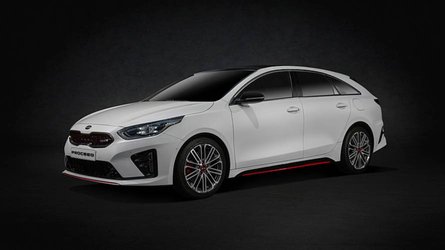 If it’s any indication, it looks like it inherits the narrow taillights of the regular Ceed but will sport a bigger set of restyled wheels. It will also have a slightly different rear fog lamp housing and of course, the fat twin exhaust tips we all love.

Going back to the ProCeed, the thinly-camouflaged tester revealed most of the teaser image in the metal. The thin LED strip was a nice touch, as well as the twin fat exhaust tips and the spoiler. We failed to see its trapezoidal third brake light up close, though, as the car was cruising intently in the video. Upon close inspection, the chiseled rear bumper was prominent in the shooting brake, which could pretty much bring the production model closer to how the Concept last year looked like.

The ProCeed’s full reveal is scheduled on September 13, but public debut would be on October during the 2018 Paris Motor Show. Until then, all our speculations would stand as they are, but we sure do hope Kia would surprise us with some great performance figures.