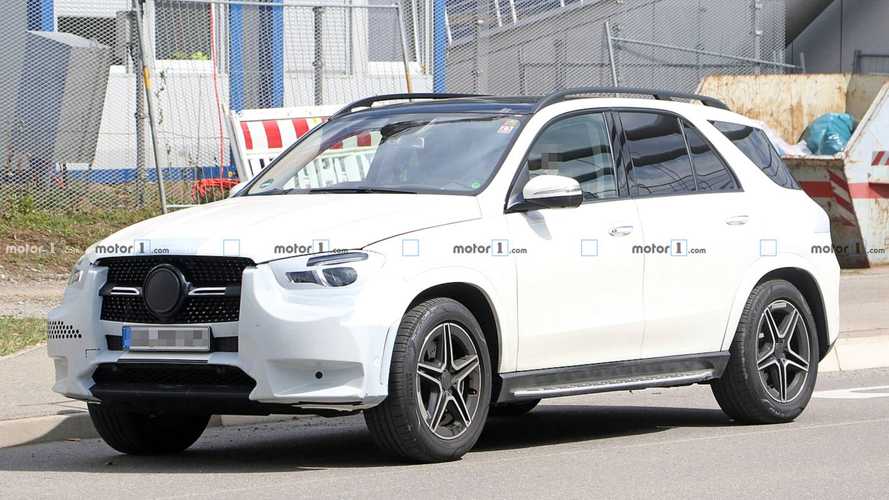 For seeing much of the new Mercedes GLE-Class SUV uncovered, there are still a few uncertain details. Powertrain details remain elusive while we know it’ll debut by the end of the year. In the last few months, everything Mercedes should have kept secret about the crossover leaked through spy photos such as uncovered exteriors and production-ready interiors. These new spy photos give us the best look yet at the new GLE before the automaker officially unveils the SUV later this year.

The only covering we spot on the vehicle is the headlights and taillights, and the odd shapes covering the bumper – which is something Mercedes has kept hidden for months. We’re doubtful the front bumper of the GLE will go down in automotive history as some benchmark in design, yet it still wears a bit of off-white camouflage.

What we do get to see looks like a production-ready crossover that’s both functional and athletic. It rides low for being an SUV with its short front and rear overhangs giving it a sporty appearance. The rear, uncovered, shows a clean design with integrated exhaust in the lower bumper fascia. At the front, the large Mercedes emblem and upright are covered, but hard to miss.

The latest batch of photos don’t include any shots of the interior; however, it’s unlikely to have changed since our last peek. Like other current and future Mercedes models, the GLE receives the large tablet-like screen that combines the digital instrument cluster and infotainment system. The interior will feature trapezoidal HVAC vents, center-console grab handles, and loads of other convent technologies.

While we don’t know powertrain details, we know the GLE 450 will feature Mercedes’ turbocharged 3.0-liter inline-six and an electric motor paired with all-wheel drive and a nine-speed automatic. We don’t know output, or what other engines are coming, but expect an expansive engine range including AMG models.

We won’t have to wait long to see the new Mercedes GLE in all its glory. The reveal could happen in just a few weeks, finally putting the rest our remaining questions about the new SUV and how it’ll compete with rivals such as the 2019 BMW X5. Expect the regular GLE models to debut soon with the more powerful AMG models following next year.