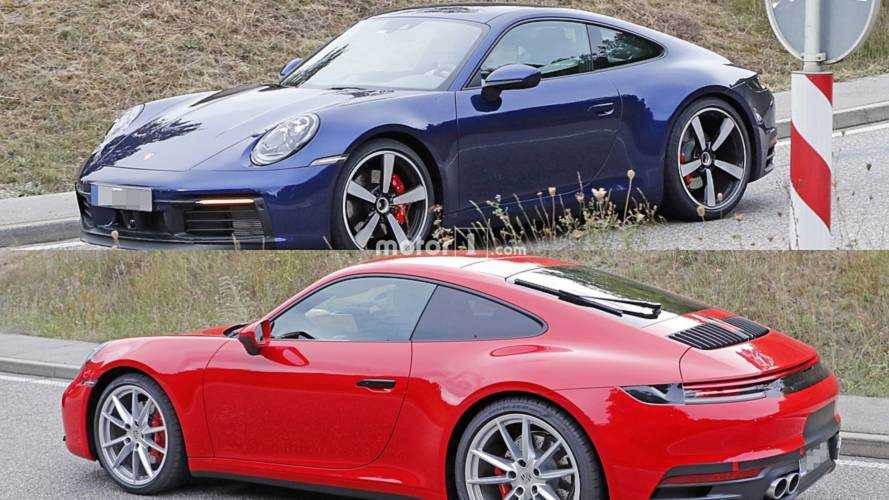 What's better than a nearly camo-free Porsche 911? Two of them!

We must be inching closer to the highly anticipated reveal of the next-generation 911 taking into account these two prototypes barely had any camouflage while undergoing final testing out in the open. Porsche slapped on some black tape on the front spoiler lip as well as on those sleek taillights reminding us of the Taycan. Although it may not seem like it at first, but both test vehicles have stickers applied onto the headlights to partially hide the actual design, although we can perfectly see the familiar four-point LED setup.

Orange Porsche 911 Spied Squeezing Everything Out Of The 'Ring

Next Porsche 911 Turbo Convertible Spied Rolling With Its Top Off

There’s not much to say about the design since no one was expecting the 911 to bring a styling revolution for its upcoming 992 generation. We would like to point out that in the image above, we can see the blue prototype with the left turn signal on and we can observe the LED strip at the back going upwards towards the corner of the bumper. The license plate holder has been moved lower on the bumper and it’s now flanked by the two round exhaust tips, which might belong to the Carrera S / 4S, although one can’t be too sure when talking about prototypes.

Yet more spy shots of naked 91

As for the red-hot prototype, the first thing you’ll see is the rather ungainly yet practical rear wiper very few people will actually get. For some reason, Porsche decided to cover the door handles, but these are exposed on the blue car. Of the two vehicles, the red car is a beefier version judging the quad exhaust tips. We can’t see the size of the tires written on the Pirelli P Zero rubbers of the blue one, but the red car rides on 21-inch wheels shod in wide 305/30 ZR tires at the back.

All that’s left to do is for Porsche to release the first images of the 992. Come to think of it, we already have a few published back in February when the model was officially previewed. We will probably get to see the first versions early October at the Paris Motor Show. Knowing Porsche, expect a plethora of derivatives to arrive in the coming years, including at least one plug-in hybrid.

Gemballa Avalanche 4x4 based on the Porsche 911