2019 Renault Arkana Unveiled As Coupe-SUV For The Masses 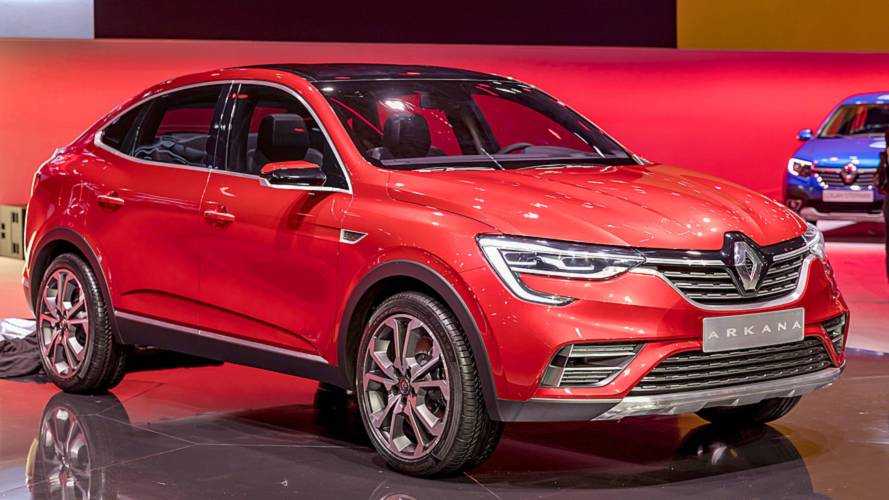 It's technically a showcar, but the production version should look virtually the same.

There once was a time when coupe-SUVs were exclusively a premium segment affair, but not anymore as mainstream brand Renault is getting ready to dip its toes into this niche. Debuting this week at the Moscow International Auto Salon in Russia, the Arkana is a compact SUV with a coupe-esque roofline for those seeking more style and willing to compromise on rear headroom and cargo capacity.

Renault calls this a showcar, but this is likely as close to production as possible. The sleek side mirrors will probably go up a size for the road-going model, but everything will probably remain almost the same. Images of the interior are not available for the time being, which means it’s either not ready yet or Renault simply doesn’t want us to see it.

Discover the latest from Renault

New Renault Concept Comes Back From The Future For Photo Shoot

Riding on large 19-inch wheels, the Arkana adopts Renault’s latest design language with full-LED headlights shaped like a “C” and with a full-width LED strip at the back where we’re noticing the dual exhaust tips (hopefully those are real.) The new model rides on a modified platform of the Russian-market Kaptur, which is essentially a slightly bigger variant of the European-spec Captur. Technical specifications are not available, though.

We have to admit the Arkana doesn’t look half bad for what it is, a coupe-SUV, but it’s still hard to get used to the idea of such a combination. The first country to get the production-ready model will be Russia in 2019, with Asia and other parts of the world to follow. Interestingly, Renault says the car’s styling will be adapted to local preferences, which means the Arkana is not going to look exactly the same in all markets.

Oddly enough, there are currently no plans to sell the model in Europe where it would serve as a cheaper alternative to the BMW X4 and Mercedes GLC Coupe.

Moscow, August 29, 2018 - At Moscow motor show, Renault unveils the ARKANA show car as a world premiere, a distinctive coupé-crossover announcing a new global vehicle. Its class-unique design will be a real novelty in a very competitive C-Segment.

The C-segment is currently the most dynamic and challenging sector of the automotive industry, especially SUVs. Customers’ needs are getting more and more diverse. ARKANA is born from those customers’ new expectations. It proposes an astonishing balance between the elegance of a sedan and the sturdiness of an SUV.

The ARKANA show car features a powerful and attractive design:
- Robustness is expressed through high ground clearance, wide wheel arches and large 19” wheels, for good all-terrain capabilities. A sturdy vehicle ready to face harsh driving and tough weather conditions.
- The elegance of the high waistline and sloping coupé roofline is emphasized by side chrome detailing and a panoramic glass roof.

"The ARKANA show car is a distinctive coupé-crossover, striking balance between the elegance of a Sedan and the powerful stance of an SUV. We have dialed in specific Renault cues, with a strong design, strength and sensuality with a French touch.” Laurens Van den Acker - SVP, Corporate Design of Groupe Renault.

This new production vehicle will be produced and marketed in different countries throughout the world, beginning with Russia in 2019. Renault ARKANA will be later manufactured and sold in Asia and other regions, with this same unique design but adapted also to local customers’ expectations.

As part of its Drive the Future strategic plan, Groupe Renault intends to step up the pace of international growth, expanding its product range to increase sales volumes up to 5 million units by 2022. ARKANA will play a key role in achieving this goal.

“The idea for this innovative concept came from Russia and the project was conducted with the strong involvement of Renault Russia teams. ARKANA will meet Russian customers’ aspirations but also the ones of new customers in many countries worldwide, enabling Groupe Renault to further pursue its international growth as part of its Drive the Future strategic plan.” Nicolas Maure - SVP, Chairman of Eurasia Region.