Famous HydroCar Can Be Yours At Auction, But There's A Catch 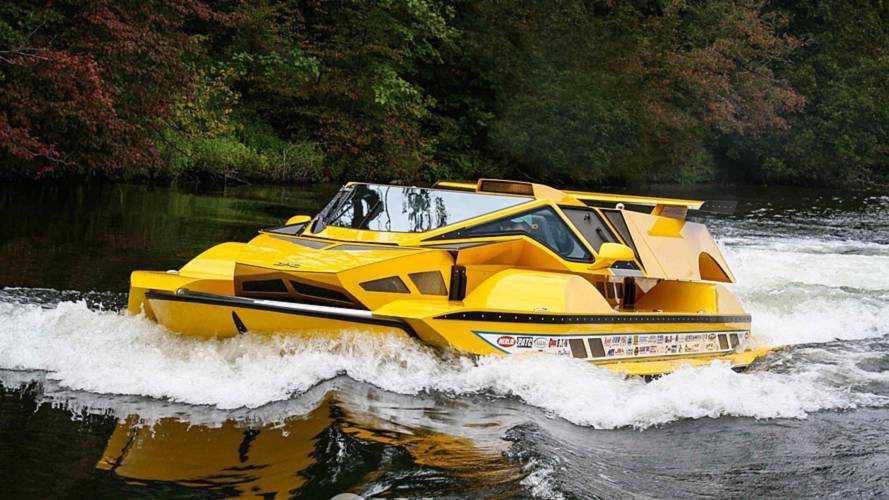 Unfortunately, you can't d(r)ive it.

When was the last time you drove a 762-horsepower (568-kilowatt) V8 with a four-speed manual gearbox? If never is your answer, then read the text below and prepare to spend your savings on something you never knew you wanted until today.

It’s called the HydroCar and is designed by Rick Dobbertin, who also developed a personal submarine. According to its creator, the vehicle is the only amphibious prototype design that “actually articulates the vehicle’s shape to morph from a land vehicle to a watercraft.” On land, its pontoons are raised to become fenders and upon entering the water they are lowered nearly eight inches to transform the car into a tunnel-hulled watercraft within just seconds.

Gibbs is Selling Off 20 of Its Aquada Amphibious Sports Cars
⠀

Cannon-Equipped Amphibious WaterCar Is Cool Way To Put Out Fire

As mentioned above, power comes from a Chevrolet-sourced V8 engine, which is fully tricked out and chromed in “show-car tradition.” The four-speed transmission is specifically built for the HydroCar by Performance Automotive & Transmission Center, as is the stainless-steel exhaust system. A transfer case splits the power to the front wheels for land mode and to the prop when in water. Both the front and rear axles are lifted by airbags in water mode.

The machine is built around a space frame and uses a hand-formed body finished in 2006 Chevrolet Corvette Velocity Yellow color. The interior features 45 control switches, 16 LED monitoring systems, and 25 VDO gauges, so you’ll definitely feel like a shipmaster. The electric system uses over a mile of wiring.

But there’s one bad thing that might ruin all the fun from owning this vehicle. While fully operational and safe, the HydroCar is “intended for a static display of incredible innovative engineering.” Simply put, you can’t just buy it, fill the tank, and dive into open water. Instead, this thing should better stay in your garage and wait for better days. There can’t be a deeper disappointment.