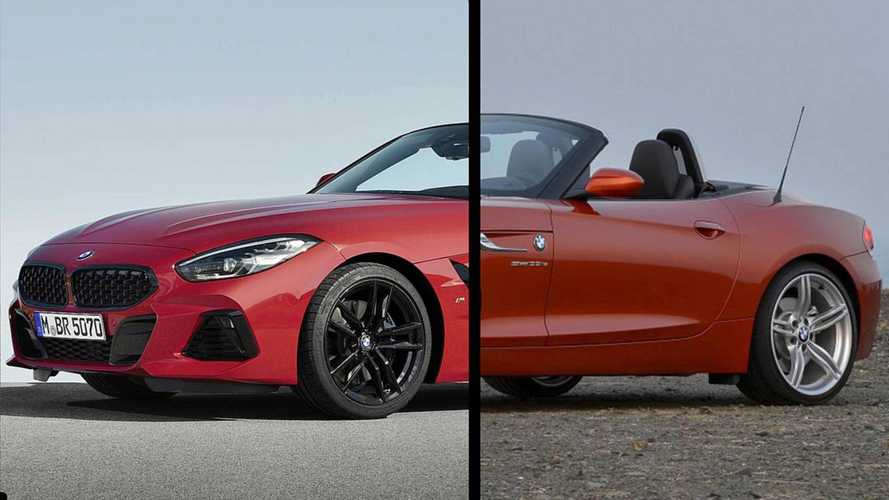 There will be no mistaking the new BMW Z4 from the previous generation.

The third-generation BMW Z4 is finally here after seeing dozens of spy shots and hours worth of videos showing the roadster's development. While the updated design is polarizing, there's no doubt that it looks completely different from the previous model. To get a better grasp on this radical redesign, let's take a look at the roadsters side by side. In all the images below, the new Z4 is on the left, and the last one is on the right.

Other than the existence of kidney grilles and the BMW Roundel, the two generations have nothing in common. The new front fascia features much larger intakes in the corners, and there are eye-catching black inlets next to them. The Z4 now has a more rounded nose, which pushes the grilles lower. Stacked headlights are a new styling element for the brand, too. More subtle sculpting in the hood replaces the hard, triangular-shaped creases from the previous generation.

BMW's designers add a new set of gills behind the front wheels. These pieces add a sporty aesthetic to the car and should provide a performance advantage by drawing hot air away from the brakes and keeping them cooler.

The new styling also features an upward sweeping crease that draws a viewer's eye to the rear wing. Conversely, the previous Z4 had a fold that pointed downward, which drew attention to the fenders.

The previous and new Z4 share the classic roadster proportions of a long nose and short rear deck. They also both incorporate an integrated ducktail spoiler at the back.

While the proportions are similar, the styling is completely different. The previous Z4 has rounded lines that give the car a vaguely retro aesthetic without specifically evoking a classic BMW. Meanwhile, the new model has a more angular shape that gives the vehicle a more futuristic appearance.

The rear end highlights how different the new Z4 looks. Longer, skinnier taillights have a sharper aesthetic. There are also now small outlets behind the rear wheels, but they don't appear to be functional. Trapezoidal tailpipes replace the existing, round outlets.

The previous-gen Z4 dates back to 2009, with a refresh in 2013, and its cabin shows the huge change in the cabin styling in the last decade. The last Z4 has analog gauges and a small infotainment screen that deploys from the top of the center stack.

The new roadster embraces the modern state of the art, including a digital instrument cluster and wide infotainment display next to it. There's also a smaller screen for showing info about the HVAC system.