It might be a new entry-level model to slot underneath the GT 53.

It was back in March at the Geneva Motor Show when Mercedes-AMG took the wraps off the confusingly called GT 4-Door Coupe in three distinct flavors: GT 53, GT 63, and the range-topping GT 63 S. Since then, we’ve seen a couple of videos with near-production prototypes being pushed hard around the Nürburgring without carrying any camouflage. It’s a different story with this test vehicle as it’s mostly covered in the typical white and black disguise with a swirly pattern.

This begs the question: Why has Mercedes-AMG bothered to cover the body of this car considering its Porsche Panamera fighter has been out for several months? The only logical explanation we’re able to come up with is that a new version is in the works to join the lineup later in the model’s lifecycle. While the title of the YouTube video indicates it might be a new flagship GT 73 variant, we strongly believe it’s the exact opposite.

Here are camo-free prototypes spotted at the 'Ring 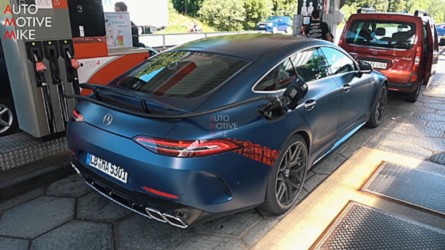 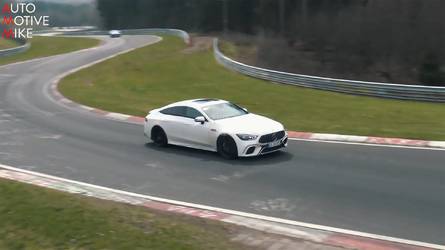 In other words, we think it’s a new base model, possibly called GT 43, taking into account the prototype only had two exhaust tips whereas the hotter versions have a more menacing quad arrangement. The mild hybrid 53 has round exhaust tips whereas the 63 editions have the familiar angular exhaust finishers you’ll see on all 63-badged cars from Mercedes. With the prototype carrying round tips, one could assume it’s a lesser version of the GT 4-Door Coupe.

Of course, that doesn’t necessarily mean the talented squad from Affalterbach is not planning a higher specification to slot above the 63 S. As a matter of fact, AMG boss Tobias Moers told Digital Trends a while back that the 2017 AMG GT Concept’s bonkers 805-horsepower hybrid setup will “one day” go into production. Fueled by trademark fillings, rumors of a new “73” series are suggesting the twin-turbo 4.0-liter V8 will be teamed up with an electric motor to deliver that staggering output in cars such as the G73, GLS73, and S73.

We will have to wait and see about that, but it looks like the GT 4-Door Coupe family will sooner or later gain a new member at the bottom of the food chain.

Have a closer look 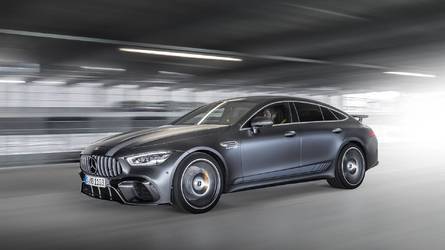 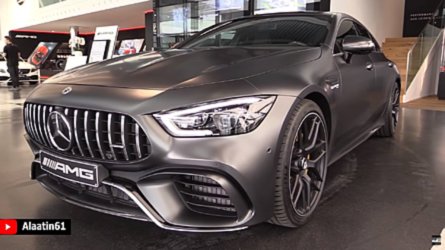