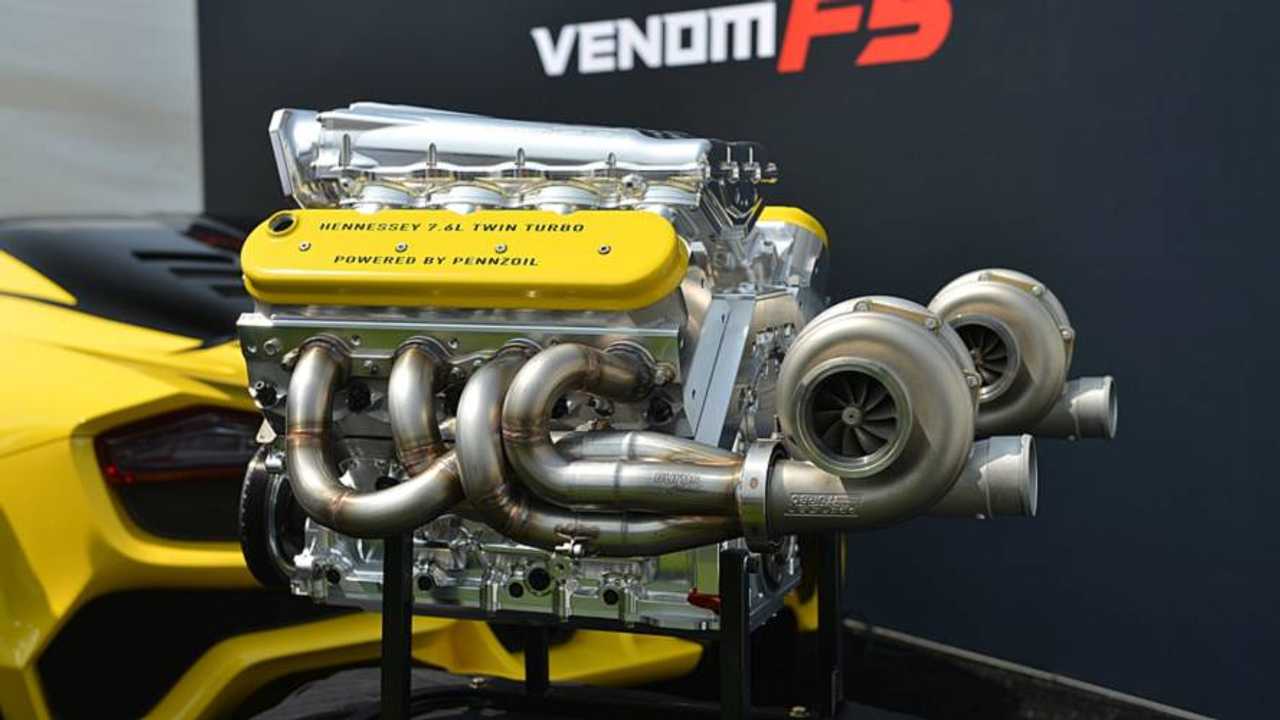 It's here, and it's powerful.

The Hennessey Venom F5 is real – at least, its engine is. Following 2017's SEMA debut, the Texas shop today pulled the sheet off the supercar's new 1,600-horsepower (1,193-kilowatt) V8 at the Quail in Monterey. And it looks insane.

The massive 7.6-liter twin-turbocharged motor fulfills Hennessey's 1,600-hp promise. Constructed of billet aluminum with steel cylinder sleeves, it has tons of torque; the F5 will reportedly be able to produce 1,300 pound-feet (1,762 Newton-meters) of torque at 4,400 rpm. Together with partners Shell and Pennzoil, the engine has been in development limbo for nearly five years.

The Hennessey Venom F5 is insane

That 1,600-hp figure gives it about 100 more horses than both the Bugatti Chiron (1,479 hp) and Koenigsegg Regera (1,500 hp). By all accounts, it's the most powerful internal combustion engine in any production vehicle thus far. With all that power, there's only one thing on Hennessey's mind: record-breaking speed.

"We're feeling confident in our quest to set new records in 2019," said John Hennessey at the debut. The most important of which will be the race to 300 miles per hour (482 kilometers per hour). Back in May, Hennessey promised that a sprint to 300-mph would take place sometime in 2019.

Take a look at these other powerful Hennessey builds

Unlike the outgoing Venom, the new F5 will ride on a custom chassis built by Hennessey engineers – no more Lotus bones. The carbon fiber body will tip the scales at under 3,000 pounds (1,360 kilograms), with a drag coefficient of 0.33.

Just 24 examples of the Venom F5 will be built, each at a cost of $1.6 million. But if you want one you better hurry – the first 15 build slots have already been accounted for.