Fast From The Past: Ford GT Heritage Edition Gets Retro Gulf Livery 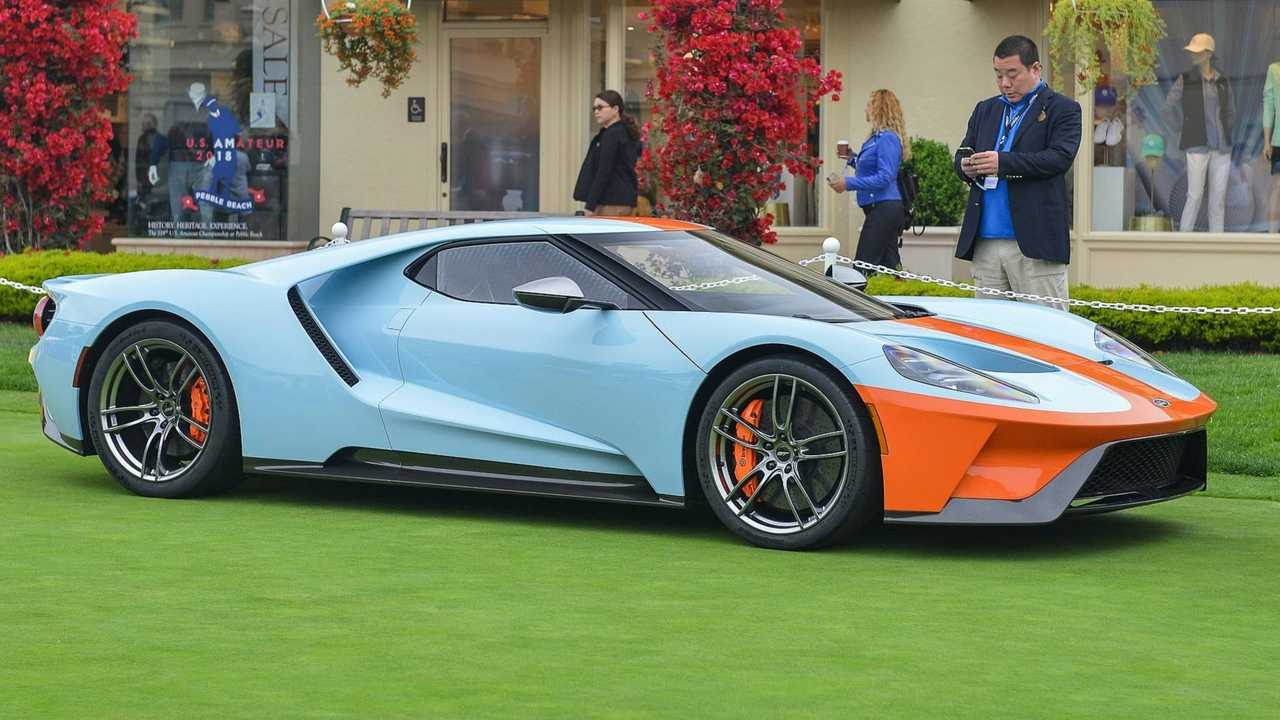 As an option, buyers can expose the carbon fiber panels in the shape of the car's racing numbers from Le Mans.

The Ford GT is a rare enough sight on the road, but now there are even rarer versions to keep an eye out for. The Blue Oval follows up the previous, red Heritage Edition with two more of them that both feature the iconic light blue and orange Gulf Oil livery.

“The 1968 GT40 quickly became a global sensation after beating its European competitors on the track four times in a row, and in honor of the 50th anniversary of its win, we’re paying fresh tribute to the original with a new heritage limited edition," Joe Hinrichs, Ford president of global operations, said about the latest Heritage Editions.

Get The Latest Scoop On The Ford GT:

The new Heritage Editions features a retro-tinged cabin. Ebony Alcantara covers the seats, instrument panel, pillars, headliner, and steering wheel. Plus, there's blue and orange stitching on the seats and steering wheel to bring a little of the Gulf color scheme inside the supercar. The upholstery pattern on the chairs evokes the tiny holes for saving weight on a classic racing bucket. Eye-catching trim includes anodized paddle shifters and high-gloss dark stainless steel finishes for the instrument panel, door bezels, and x-brace. Plus, carbon fiber adorns the door sills, air vents, and center console. Each Heritage Edition has a plate showing the car's serial number, too.

The Gulf-liveried GTs will be available for 2019 with an optional "9" racing graphic (see above) on the hood, doors, and interior door panels that will actually be the body's exposed carbon fiber, rather than just a decal. The 2020 models will use a "6" graphic, instead.

The Heritage Edition package doesn't touch the powertrain, so these models retain a twin-turbo 3.5-liter V6 with 647 horsepower and a seven-speed dual-clutch gearbox.

·       Ford GT Heritage Edition will have a unique two-year run, with optional exposed carbon fiber accents featuring No. 9 graphics for 2019 and No. 6 graphics for 2020

“Many view the Gulf Oil paint scheme as the most famous in motorsports,” said Joe Hinrichs, Ford president, global operations. “The 1968 GT40 quickly became a global sensation after beating its European competitors on the track four times in a row, and in honor of the 50th anniversary of its win, we’re paying fresh tribute to the original with a new heritage limited edition.”

Known among racing enthusiasts as chassis No. 1075, the 1968 GT was one of just a few individual cars to achieve repeat victories in the 24 Hours of Le Mans.

For the first time, an optional package provides exposed carbon fiber accents for both the interior and exterior of the Ford GT Heritage Edition. For 2019, the package features the No. 9 graphics on the hood and doors, as well as a ghosted image on the interior door panels. For 2020, No. 6 honors the same car that went on to win Le Mans in 1969 with a different number.

High-gloss dark stainless appliqués accent the instrument panel, door register bezels and x-brace to round out the interior.

“We are delighted to partner with Ford to help the Gulf-themed Heritage Edition Ford GT become reality. The Ford Marque has played a major role in creating Gulf’s place in motoring and motorsporting legend and the same is true in reverse,” enthused MD of Gulf Oil Lubricants India Ltd, Ravi Chawla. “Every Gulf outright victory at Le Mans has been Ford-powered and of course Gulf Ford GT40s took the latter two wins of Ford’s four consecutive victories at Le Mans from 1966-1969. What could be more fitting than both brands coming together to produce this fantastic motor car – the modern spiritual successor to the amazing Gulf-Ford GT40s that took Le Mans and World Championship honours.”