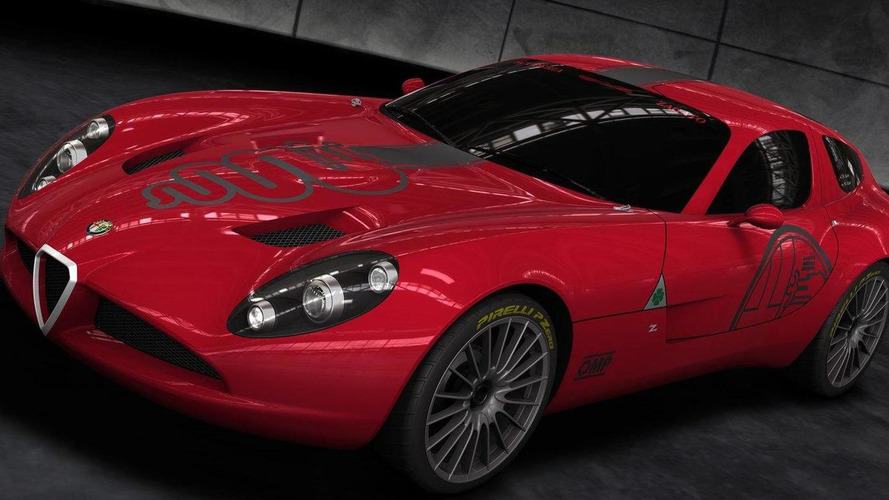 Limited series production for the Zagato Alfa Romeo TZ3 would base the car on the Dodge Viper.

But the car will be very different from the TZ3 Corsa we saw a year ago. That car was based on the Alfa Romeo 8C, but Auto Bild reports the future Zagato Alfa TZ3 will be based on the Dodge Viper.

That would change its dimensions significantly as the two-seater, rear-wheel drive supercar will grow wider, longer and heavier too than the 850 kg (1874 lbs) TZ3 Corsa. Heavier by a good 600 kg (1320 lbs), says Auto Bild.

And all that extra power would do is make up for all the extra weight.

The TZ3 will be presented at Pebble Beach in August with production set to begin in 2012.

UPDATE 04.01.2011 - Zagato has sent us some clarifications and corrections regarding TZ3. From correspondence verbatim:

1) "Project TZ" was issued by Andrea Zagato and his staff in 2010 to honour Alfa's 100 years of production and the long tradition of race Alfas with Zagato body.

2) The first step of this project is the 2010 ALFA ROMEO TZ3 CORSA which was officially introduced to the public at 2010 Villa d'Este Concours (where it was prized with the Concept Design Award).

3) The TZ3 Corsa isn't a concept. It's a one-off that was commisioned by Martin Kapp (who is correctly mentioned in the article) who owns an Alfa Romeo TZ and a TZ2. It's not road legal. It will remain a one-off. No more units in the future

4) The TZ3 CORSA isn't based on the Alfa 8C. The TZ3 corsa is based on a monoshell carbon fiber chassis which is coupled with a steel tubes roll cage. The body is formed by handbeaten alloy panels. The engine is the 4.2 Maserati V8. None of these elements is shared with the Alfa 8C.

6) The Alfa TZ3 STRADALE isn't the road legal version of the TZ3 Corsa. ZAGATO ATELIER never conceived the project in such a way. Despite a resemblance, they are totally different in terms of mechanical layout. There isn't any relationship among them apart from being ZAGATO bodied cars and sharing the TZ design and name.

7) The ALFA ROMEO TZ3 STRADALE is based on the DODGE VIPER (rolling chassis, engine, gearbox, suspensions and so on) and it's totally road-legal. It's already in existance as It was commissioned in 2010 by an American enthusiast. It's not headed for production.

8) The ALFA ROMEO TZ3 STRADALE is bodied with a carbonfiber body and has the same dimensions and weight of its donor-car.