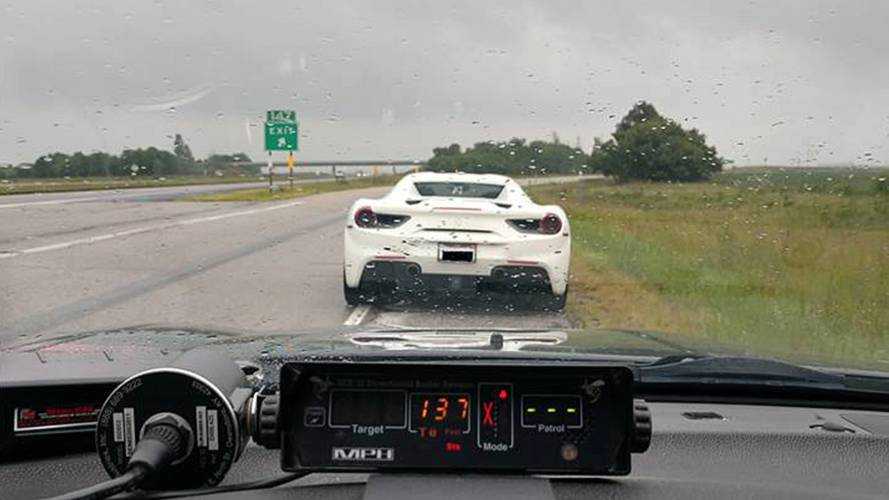 She thought she was only going 100.

Here we have another lapse of judgment behind the wheel of a supercar. At least this time the failure of common sense occurred on an open stretch of highway during daylight hours, unlike our recent story featuring a speeding Aston Martin Vantage going four times the posted limit through a school zone in the twilight of early evening. The big faux pax this time around – aside from going 137 mph (220.4 km/h) in a 70 mph (112.6 km/h) zone – is the Ferrari 488 Spider driver deciding to let it rip in the rain.

That’s a dicey proposition for any car in the wet, never mind a Ferrari. It gets better though because the lady behind the wheel wasn’t the car’s owner. In fact, it was a rental Ferrari, so presumably, she didn’t have much supercar experience period, never mind in less-than-ideal conditions. She must’ve had a handle on things though, since the highway patrol’s post shows an intact car sitting on the side of the highway and not a mangled wreck in a cornfield.

There’s another facepalm-worthy facet to this story, as the above Facebook post points out. When questioned by the officer as to her speed, she said she thought she was “going around 100.” Admittedly, 30 mph over the posted limit is probably better in the eyes of the law than 67, but it’s still a court-worthy appearance to explain yourself.

The whole thing happened on I-35 north of Des Moines. The Drive talked with law enforcement who confirmed the relative location and driver’s destination of Minnesota. If we’re honest, that stretch of highway through Iowa is terrifically straight, and flat, and as boring as watching corn grow, which is literally what you’re doing all the way to the state line. We can’t say we’d be opposed to opening the taps on a 488 in a similar environment, but not up to a buck forty and certainly not in the rain. This could’ve ended so much worse, so bravo to officers for reeling in this rented Ferrari and possibly saving the driver’s life.