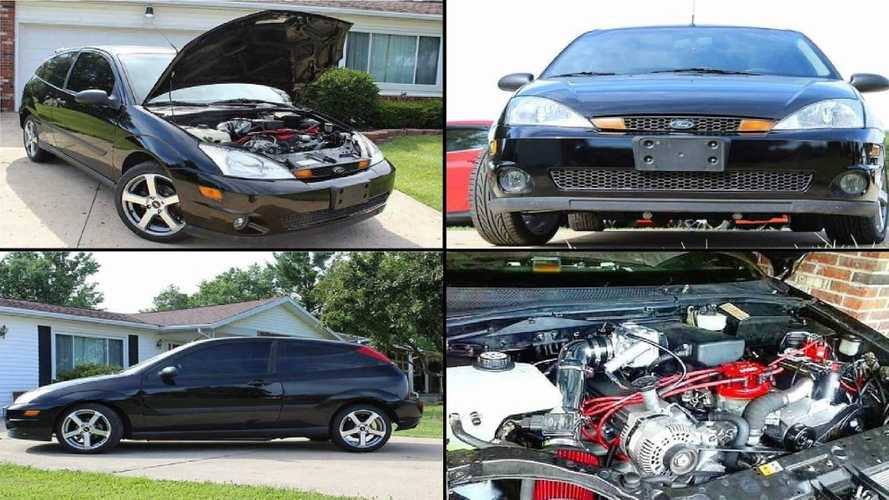 It is the perfect definition of a wolf in sheep's clothing.

The first generation Ford Focus was a small revolution in the automotive industry. When it was launched for the first time in 1998, it brought a fresh design, quality materials, and modern technologies to a segment, where boredom and monotony were dominating. Later during its life, it received hot ST and RS versions, and became one of the most desirable hot hatches on the market. But it never received anything bigger than a four-banger from the factory.

The Web's Coolest Cars For Sale This Week

However, we have something special for those of you who need a more powerful and potent first-gen Focus. This is a two-door 2002 Focus hatchback, located in New Lexington, which features a massive V8 engine underhood and is driven by its rear wheels. It rides on full Kugel Performance suspension installed by specialists, “not homemade.” The engine is sourced from a 1991 Mustang and has recently received a new fuel injection system.

The seller explains all the brakes components have been replaced with new and some of the suspension parts have also been revised. The car has just 54 miles (87 kilometers) on the odometer after it was built and is in generally very good condition. The only thing that needs attention is the exterior, which requires some bodywork and a full polish and wax.

The reason for the sale? The owner says he has other projects he is currently working on and not enough time for the Focus. A trade for a Mustang or another interesting project is possible, as is a sale as a rolling chassis.

Interested already? The seller is asking $8,500 for the vehicle, but, as mentioned above, he will also consider different trades. Show up to the seller with anything in the region of $8,000 and we bet you could take it home. At least it’s worth a try.