It'll debut in a few days at the Pebble Beach Concours D’Elegance.

It was at the beginning of July when Mercedes announced plans to unveil a new concept car pompously called Aesthetics Progressive Luxury by showing a fancy sculpture of the retro-themed showcar. About a month later, a teaser video was posted on Facebook to serve as a reminder the three-pointed star is cooking up something special for Pebble Beach.

Mercedes’ design boss Gorden Wagener took to Instagram to share a new preview video of the concept, showing a shadowy silhouette of the one-off. By the looks of things, the Aesthetics Progressive Luxury will harken back to the 1930s and the Silver Arrows, but with a modern twist. Some of the hashtags attached to the Instagram video say #SwitchToEQ and #eqsilverarrow, which can only mean the showcar boasts an electric powertrain. 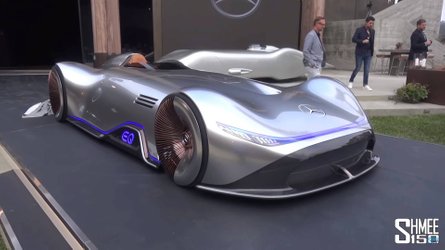 The timing is right to give the EQ family more exposure considering Mercedes is on the verge of introducing the production-ready EQ C, a fully electric compact crossover. The German automaker has already announced plans for electric equivalents of the C-Class and S-Class, so what better way to tell the automotive world about the electric assault if not by coming out with a spectacular concept?

Indeed, the high-tech sculpture looks quite promising and we’re dying to see the showcar. We won’t have to wait much longer as the Aesthetics Progressive Luxury will premiere on Friday at the Pebble Beach Concours D’Elegance.

While the concept will be just for show without plans for production, Mercedes is working on an electrified high-performance machine in the shape of the F1-engined Project One. Let’s also keep in mind that towards the end of last year, a mysterious SLS AMG Electric Drive test vehicle was spotted, which might’ve been a sign of another hardcore EV. Going back in time even further, AMG boss Tobias Moers announced in October 2016 plans for an entirely electric model.