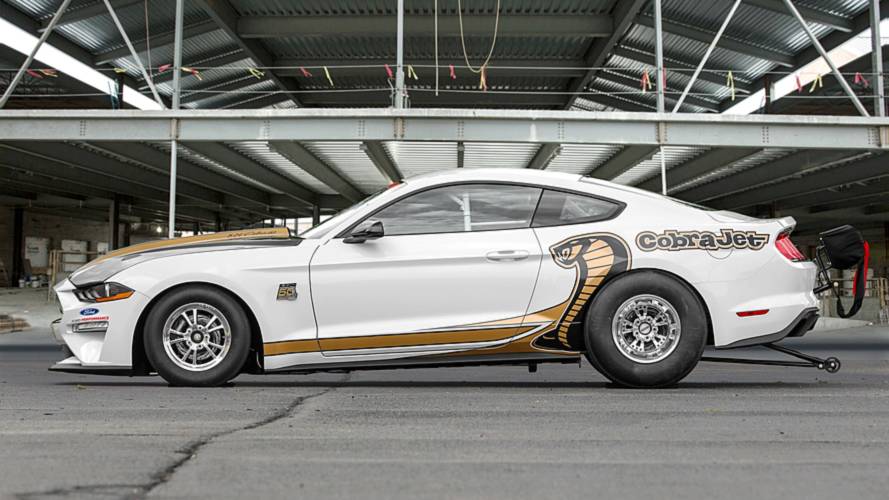 Earlier today, Ford unveiled the Mustang Cobra Jet – a purpose-built drag car that’s still shrouded in a tad bit of mystery. We know it’ll eat the Dodge Challenger Demon for breakfast, lunch, and dinner so long as the Demon is willing to play at the race track. Ford says the Cobra Jet is capable of running the quarter-mile in the mid-eight-second range. Sorry, Dodge. The Cobra Jet is capable of reaching 150 miles per hour (241 kilometers per hour) in a standard quarter-mile race. That is blisteringly fast.

When Ford revealed the Cobra Jet, they decided that it should put on a small show for those in attendance by starting and revving the Jet’s supercharged 5.2-liter V8. We don’t know just how much horsepower the Cobra Jet makes – that’s something Ford is keeping secret. However, if we look at the stats, we can imagine there’s quite a bit of oomph hitting the rear tires. The Cobra Jet sounds like a beast – the Devil himself.

There are plenty of specialty Ford Mustangs:

While we don’t get to see the Cobra Jet use its unspecified amount of horsepower, it certainly has the racing chops on paper. The 5.2-liter V8 is a special version of the automaker’s 5.0-liter Coyote V8 with a 3.0-liter Whipple supercharger on top. The independent rear suspension is replaced with a 9-inch solid rear axle – as the drag Gods intended. Other suspension upgrades include two-way coilover shocks with adjustable ride height and a four-link rear suspension arrangement with antiroll and panhard bars. Inside, the Cobra Jet comes with an NHRA-certified roll cate and FIA-certified seats. No race car would be complete without a parachute on the rear for added stopping power.

It’ll be difficult to catch one of these racing at you local test and tune. Ford will only make 68 examples of the Mustang Cobra Jet, which Ford originally introduced 50 years ago in 1968. However, this probably isn’t the last we’ll see of the Cobra Jet. Over the years, the automaker has rolled out other race-ready drag cars that resemble the Mustang everyday people an buy in name only. While Ford is celebrating the car’s 50th anniversary this year, expect the nameplate to continue into the future.