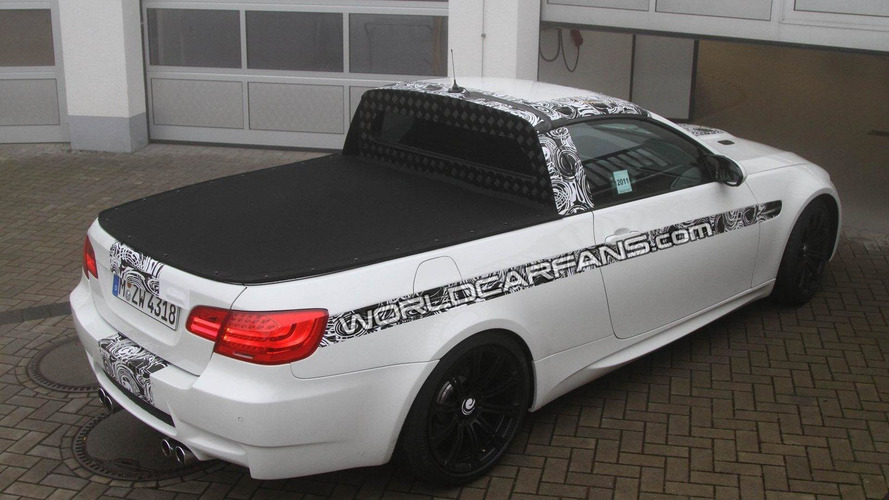 Chief of product development cops to the M3 pickup being a joke. The model will be shown alongside several other unproduced M3-based prototypes at the very real M5 Concept debut on April 1st.

Well, we had to know that this was going to turn out to be a joke.

And in retrospect our speculation that this M3 pickup was going to be some kind of one-off vehicle used to move parts around a production facility is kind of funny. Although, what is BMW going to do with this prototype anyway?

According to Autoblog.com, BMW has copped to the M3 pickup being an April fool's joke. The model will accompany the very real M5 Concept's debut on April 1st.

Dirk Arnold, head of product development, told Autoblog.com," Ah, yes, everyone's been talking about that pickup. But, no, this is... how you call it, an April Fool's Joke...It is hugely doubtful that BMW will ever during our lives produce such a vehicle, in any segment."

Well, he didn't have to shut the door on it so hard. But it's probably the right thing to do.

BMW will premiere the M5 concept at a press event near Munich on April 1st along with a series of M3-based prototypes which have never been produced, including, of course, this El Camino-ized M3.

Interestingly, there will also be an M3 with a folding hardtop on hand. And maybe that one's got a chance at making it to production.