One of Russia's older fighter plane designs takes on one of Lamborghini's more recent supercars.

[UPDATE, August 14] Autocar India has kindly asked us to take down the video.

The Lamborghini Huracán Performante is one of the Italian brand's quickest vehicles thanks to a mid-mounted 5.2-liter V10 that pumps out 630 horsepower (470 kilowatts) and 443 pound-feet (600 newton-meters). This potent mill is enough to get the coupe to 62 miles per hour (100 kilometers per hour) in just 2.9 seconds and a top speed of 202 mph (325 kph). The navy of India recently got to find out if the supercar was quick enough to beat one of its MiG-29K fighter planes in a race.

The MiG-29 is a somewhat older fighter plane, having entered service in Russia in 1982. India's military has a fleet of them with modern upgrades like cockpits full of digital gauges for easier piloting. In terms of speed, a pair of jet turbines can produce up to 20,000 pound-feet of thrust with the afterburners running, and they propel the plane to give the Huracan a run for its money in this video.

Unfortunately, the person shooting this clip is rather far away. It provides a decent perspective on the action, but the Lamborghini looks like little more than a black spot next to the plane. We would love to see and hear the action from inside the cockpit of either machine.

See What Else The Huracan Performante Can Do: 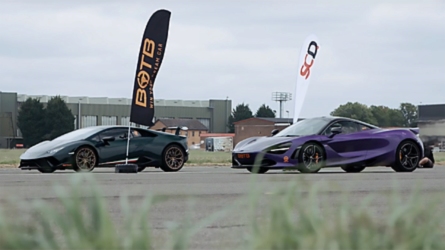 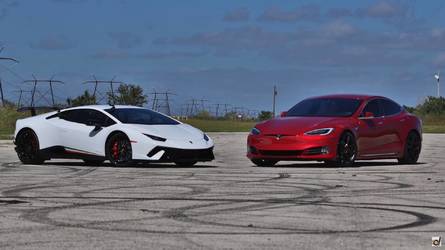 According to the comments in this tweet, the stunt was part of the filming for an upcoming commercial for India's military. Therefore, the MiG taking a comfortable lead early in the race might have more to do with promotional reasons than the aircraft's actual acceleration advantage against the Huracán. Still, either being in the fighter or in the Lambo would have been a ton of fun.

Assuming you're fairly wealthy, it's actually possible to recreate this race. A new Huracán Performante would set you back $274,390, and pre-owned examples of the MiG-29 are actually available for sale. This 1986 example costs a mere $4.65 million.

Source: Autocar India via Chopsyturvey via YouTube, 2 and The Drive