The Audi S3-rivaling Mercedes-AMG A35 will grace us with its presence at the Paris Motor Show in October, but if you have your mind set on the lesser A250, we can confirm it’s no slouch. Featured here in the sportier-looking AMG Line trim, the hottest A-Class hatchback money can buy today in Europe was taken on an unrestricted section of the Autobahn. Why? To undergo a top speed run, of course.

Available in domestic market Deutschland from a pricey €36,461 for the front-wheel-drive model and from €38,663 for the 4Matic-equipped version, the A250 uses a turbocharged 2.0-liter gasoline engine. It pumps out 221 horsepower in both flavors, channeled to the wheels through a seven-speed, dual-clutch automatic transmission. Regardless if it’s the FWD or the AWD version, the posh compact hatchback needs 6.2 seconds until 62 mph (100 kph) and tops out at 155 mph (250 kph).

Have you seen the A-Class Sedan?: 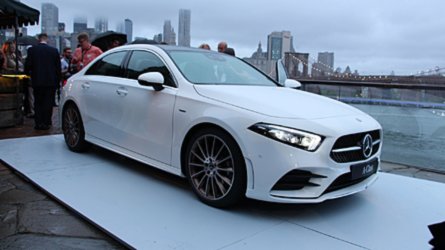 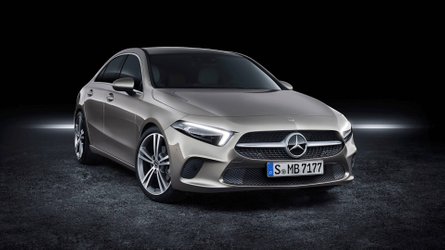 Featured here is the FWD A250 offering lively acceleration that seems to be on a par with the official numbers, at least up until hitting the 62-mph mark. One minute and 45 seconds into the video, the digital speedometer of the A250 AMG Line reaches 152 mph (244 kph), which is close to Mercedes’ quoted maximum velocity. The driver kept on flooring it, but the electronic top speed limiter kicked in, so if you want to go faster than that, you’ll have to step up to the A35.

The first AMG-badged version will up the power ante to somewhere in the region of 300 hp, while the A45 is going to hit the 400-hp mark. There’s also going to be an A45 S with even more power, but it won’t be introduced in the foreseeable future. These AMG-branded A-Class models will be offered both as five-door hatchbacks and as four-door sedans. While the hatch won’t be coming to the U.S., the recently unveiled sedan will be available stateside.