A recent spy shot caught a Jeep Wrangler Moab edition on a car hauler, and plenty of details have leaked out about the rugged model. According to pricing details obtained by JL Wrangler Forums, the model will cost $51,200 (plus $1,495 destination), and it'll essentially be an upgraded version of the Sahara trim.

Mechanically, the Moab will exclusively be available with the 3.6-liter V6 with 285 horsepower and 260 pound-feet of torque and an eight-speed automatic. The edition will come with the Selec-Trac full-time four-wheel-drive system and limited slip differential – generally optional features on the Sahara. Blindspot monitoring, cross-path detection, and rear park assist also come standard on these SUVs.

The Wrangler Is Ready To Work: 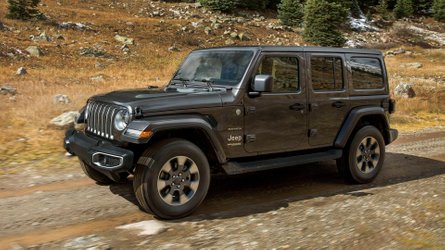 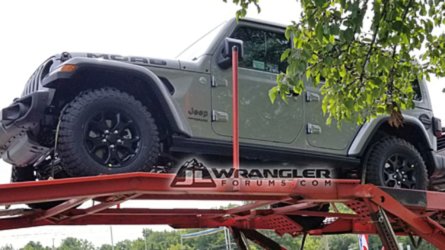 On the outside, Moabs feature a dual-vented Rubicon hood with a decal proclaiming the edition on the side. The models also feature the Wrangler's steel bumper, black tow hooks at the front and rear, and Mopar rock rails. They ride on 17-inch Rubicon wheels in low-gloss black and come with a body-color hard top. The generally optional LED Lighting Group comes standard on the Moab, and it includes LED illumination for the headlights, accent lamps, foglights, and taillights.

Inside, the special edition comes with a leather interior that includes wrapping the parking brake handle, shift knob, and instrument panel in hides. The Moab also has an 8.4-inch infotainment system with navigation and a nine-speaker stereo. Passive keyless entry means owners can just slide into the driver's seat and hit the trail without bothering with the key.

Buyers will also be able to load up the SUV with options. The Cold Weather Group adds heated front seats, heated steering wheel, and remote start. There's an available power top, in addition to the ability to get both the three-piece hard top and soft top. Customers can also get a cargo management system that incorporates into the cargo door.

According to JL Wrangler Forums, the Moab edition is part of the August order guide, so expect Jeep to release official info and images soon.