We also get a look inside the electric crossover.

We’re less than a month away from Mercedes debuting the EQ C, and our spy photographers captured the best look yet at the electric vehicle. The EQ C is wearing little camouflage, giving us a first-time peek at some new design elements.

At the front, we see more of the grille, which spans from headlight to headlight. Below that, we see the full width of the lower fascia and the smaller grille for the first time. Moving to the back of the crossover, we see the rear greenhouse design – a triangular window that’s angled upward toward the rear. More of the hatch glass is exposed, and the lower bumper looks production-ready for the first time. Previous prototypes covered most of the hatch glass and had a janky rear bumper. Its size looks like it will slot between the GLC and GLE. 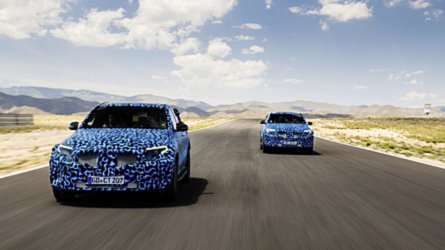 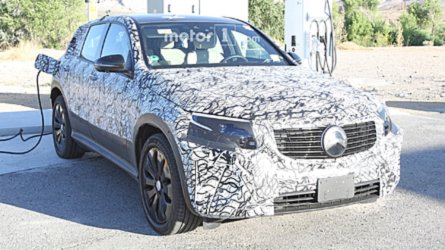 Inside, we see the giant screen that spans between digital gauge cluster and infotainment system. The steering wheel is typical Mercedes. The center console appears similar to the one in the 2019 GLC, which includes a new multifunction touchpad with handwriting recognition.

Powertrain details are still murky. However, rumors suggest an electric motor on each axle delivering 400-430 combined horsepower (298-320 kilowatts) with an expected range of 310 miles (500 kilometers). When Mercedes rolled the EQ C out as a concept, the vehicle produced 402 hp (300 kW) with a range of 250 miles (400 km) from its 70-kilowatt-hour battery. It was capable of a sprint to 62 miles per hour (100 kilometers per hour) in less than five seconds.

The EQ C is the company’s first ground-up EV, spearheading a plan for future electric models that include a large sedan – EQ S – and a smaller A-class sized car – the EQ A. There will be more models in the future that will likely take the shape of a crossover or SUV.

Mercedes will debut the EQ C September 4 in Stockholm, Sweden. We should know more details about the vehicle, including the powertrain, then.

14 Photos
Photo by: CarPix
By: Anthony Alaniz
++
Got a tip for us? Email: tips@motor1.com