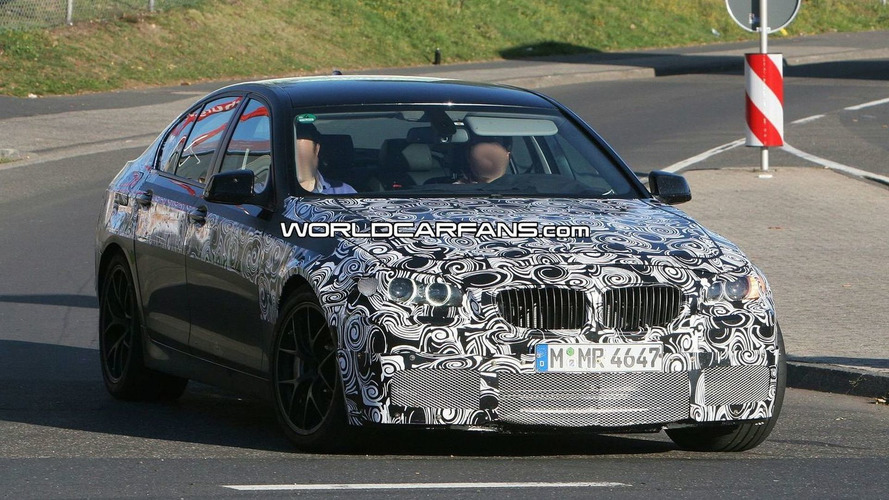 Without showing the full monty BMW has just released a very solid preview/teaser video of the fifth generation BMW M5 sedan internally known as the F10M.

Without showing the full monty BMW has just released a very solid preview/teaser video of the fifth generation BMW M5 sedan internally known as the F10M.

Previous reports have mentioned an M5 concept debuting at the Shanghai Auto Show next month. Judging by the depth and frequency of these teaser videos Shanghai is very possible, although it could be mixed signals for the BMW 5-Series New Energy Vehicle coming through. If the M5 is a no show in Shanghai, then the Frankfurt motor show in September is a sure bet.

Motivating the M5 is same twin-turbo 4.4-liter V8 found in the BMW X5 M and X6 M. Power output however is expectedly increased to 600 PS (441 kW / 592 bhp) over the SAV's 555 PS (547 bhp / 408 kW). Channeling the power down to the wheels is a seven-speed DCT dual clutch transmission featuring three shift programs in addition to a fully automatic mode.

According to Evo Magazine, who sampled a test prototype recently, the steering, suspension and drivetrain have three modes: comfort, sport and sport-plus. Furthermore, the MDM (M Driving Mode) raises the threshold of DSC intervention - perfect for those who want more control but still some backup. For those who want full control can switch it off completely giving unadulterated access to a 600 horsepower rear-wheel-drive luxury sedan.

Note: Below is the long version of the video above with dialogue in German language. Testing in the Alps the BMW M5 Prototype is driven by test drivers Bernd Limmer and Frank Lutz. Limmer speaks about the M5 driving capabilities under different driving conditions such as driving on snow. In discussing M-Dynamic-Mode and the M5 suspension, Limmer demonstrates the DSC-System by stopping and taking off on an uphill slope (taking foot off the brake pedal and pushing the accelerator). Test driver Frank Lutz shows us how they measure cold starts with a laptop.