VW Tanoak Pickup Truck "Carefully" Being Considered For The U.S.

Earlier this year at the New York Auto Show, Volkswagen teased American consumers with the Atlas Tanoak pickup truck. Yes, the truck market is dominated by Ford, General Motors, and Ram, but foreign automakers such as Toyota, Nissan, and Honda have carved out a niche of buyers looking for something different. At the time, VW said it had no plans to put the Tanoak into production. Fast forward to this week, and it appears the company’s changes its stance – if only slightly.

According to Autocar, Hinrich Woebcken, CEO of Volkswagen North American Region, said, “It [The Tanoak] fits the brand well, because we want to get more American in the U.S., but it’s something we have to look at carefully. It’s a very patriotic segment, which American manufacturers dominate.”

A month before the New York show, Woebcken said the midsize truck segment doesn’t represent enough sales for the company. He said then of midsize pickups, “Basically small volume. The numbers are small, not convincing. We have so much work and potential to grow in the existing segments, that this is not the top of our list.” 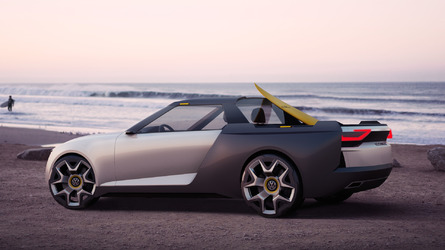 It sounds like VW is waiting on the alignment of several factors; however, we have no idea what those are. Automakers are pushing back into the segment with the Chevy Colorado and GMC Canyon. Ford is bringing back the Ranger, and even Hyundai is readying its own mid-sized pickup – the Santa Cruz. VW could be watching how well the Hyundai sells, considering its a foreign option in a highly competitive market that is loyal to domestic brands.

The concept revealed earlier this year borrows many styling cues from the Atlas SUV, which is available to U.S. consumers. The Tanoak has a more rugged appearance. Inside, the concept added tougher styling cues, such as a sturdier and chunkier shifter and drive-mode selector. The seats were improved to add more lateral support for off-roading. Even the engine under the hood is found in the Atlas – a 3.6-liter V6 engine delivers 276 horsepower and 266 pound-feet of torque. An eight-speed automatic sent power to the 4Motion all-wheel-drive system.

It doesn’t look like the idea of the Tanoak hitting production, and U.S. dealerships aren't dead yet. However, it seems like if VW makes the decision, it will be only after the company is confident there’s a market for its pickup. Until then, the Tanoak is just a dream.